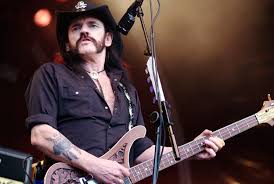 Years ago a buddy of mine saw some members of Aerosmith strolling through a Vancouver mall.  They were easy to spot in the crowds, he related, as they were the only forty-something men dressed and coiffed as teenagers. More poetically, in his great Rolling Stones bio Symphony For the Devil, Philip Norman watched the band shepherded to the stage at a latter-day concert and compared them to “the last tiny herd of some nearly extinct gazelle.”   Each observation makes the same point:  rock ‘n’ roll is youth music, which, when practiced by the no longer youthful, can be freakish at best and embarrassing at worst.

And what of the audience?  While much has been made of rock performers adapting to middle age, or not (“Steel Wheelchairs,” “Jurassic Rock,” etc.), less considered is how rock listeners can make the transition.  This occurred to me recently when watching the 2010 documentary Lemmy, about Motorhead’s redoubtable bassist, singer, and spokesman Lemmy Kilmister.  In the film, Lemmy comes across as a perfectly decent guy who’s led – survived might be a better verb – a remarkable life, someone as willing to play a recurring role as to play a catalog of beloved hits to fans around the world.  I couldn’t help feeling a little sorry for him, though:  pushing seventy years old, virtually pickled in alcohol and amphetamines, and trapped in a rock ‘n’ roll fantasy as narrow as anything conjured by his devotees.  Is this the Motorhead ideal?  Is this the way Lemmy-lovers would live if they could?

At age nineteen I could see representations of twenty-nine- or thirty-six-year-old rockers as avatars of how I wanted my adulthood to unfold:  rich, famous, constantly wasted and regularly serviced by groupies (I did realize one of those ambitions for a while, but that’s another story).  At forty-eight, however, the rock lifestyle looks less appealing when lived at sixty-eight or seventy-three.  I don’t think I’d trade places with Lemmy, or the documentary’s interview subjects like Ozzy Osbourne and Alice Cooper; even younger figures like James Hetfield, Nikki Sixx, and Slash seem curiously diminished, grown-up men who know all about Jack Daniel’s whiskey and Marshall amplifiers but who probably have less to say about global warming, Mideast politics, or the cost of car insurance.  We can also assume these people have squads of handlers picking up after them, which mere mortals have to go without.  Sobriety, monogamy, and general ordinariness turned out to have their rewards after all, whereas endless routines of sex, drugs, and rock ‘n’ roll now strike me a little limited.  The drugs and rock ‘n’ roll part, anyway.

Motorhead are still a great band, and, relative to a lot of celebrities, Lemmy is still an admirably independent and honest individual.  If I’d done nothing but play, record, and tour in hard rock bands since late adolescence, I like to think I’d have a similar musical talent, personal integrity, and physical constitution three or four decades later.  But I didn’t, and I don’t, and that’s okay.  Thanks, Lemmy, for showing me the way and saving me the trouble.