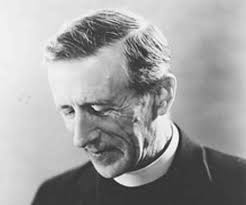 Since I began blogging, I’ve been reminded of the argument that I am now part of a planetary consciousness that represents the next stage in human development.  Indeed, the Internet as a whole, it’s said, fulfils the visions of the Jesuit philosopher Pierre de Teilhard de Chardin, who foretold the coming of an oceanic global mind, a unified repository of knowledge and feeling to which every person on the planet could contribute and from which every person could draw.  So the big question:  is today’s blogosphere the same as Teilhard’s noosphere?

Teilhard (1881-1955) was a priest and a paleontologist who sought to reconcile the reality of biological evolution with his passionate Christian faith; he prophesied an eventual merging of matter and spirit at an ultimate cosmic junction he termed “Omega Point.”  (If you’ve never heard of Teilhard, you’ve likely seen William Peter Blatty’s fictionalized version of him:  the craggy cleric Lankester Merrin, played by Max von Sydow, in The Exorcist).  The noosphere, Teilhard wrote in My Fundamental Vision, was to be “the pan-terrestrial organism in which, by compression and arrangement of the thinking particles, a resurgence of evolution (itself now become reflective) is striving to carry the stuff of the universe towards the higher conditions of a planetary super-reflection.”  Could that be a 1948 description of our Google / Wikipedia / Youtube / WordPress / Twitter existence in 2018?

The sheer range of data and expression available online is certainly staggering.  At last report there were two billion of us using the Internet, with another five or six billion waiting to log on in the coming decades.  It’s fair to say that this collective pooling of ideas is revolutionizing civilization.  More people have more access to more information than at any time in history, and more people can add to that information than ever before.  Art, commerce, governance, science, education, warfare – there’s hardly a single aspect of human affairs that hasn’t been transformed by the World Wide Web.  It is as close to the science fiction ideal of a global brain as our species has come.  Yet whether this signifies the true emergence of the noosphere, as Teilhard saw it, is another question.

Teilhard never viewed the Omega Point as something reachable by technology, and it’s doubtful he would recognize our umbilical attachments to cell phones, laptops, and Blackberrys as some kind of mass spiritual confluence.  Nor did he say anything about a maximum of 140 characters, un-friending, memes, or viral videos.  Some of what’s on the Internet, of course, is quite high-minded, and the medium has been credited with fostering medical breakthroughs, sustainable engineering, the spread of democracy, and a DIY creative renaissance.  But the noosphere was imagined not just as a thing of encyclopedic breadth but mystical depth, and this, I think, is where the comparisons to the blogosphere are premature.  For all the historic changes witnessed in the Information Age, they are more The Social Network than 2001:  the merest intimation of the profound psychic metamorphosis Teilhard anticipated, “glowing with the magical nimbus of all that art and poetry have gradually accumulated.”  My best efforts notwithstanding, the international community of bloggers has a long way to go before arriving at the Omega Point, and the last time I looked, around the house or around the Web, matter and spirit remain distinctly separate.