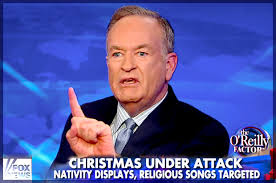 This is that magical time of year when commentators are often heard complaining about putting the Christ back in Christmas, and, more stridently, that there is currently a “war” being waged against the holiday, directed by politically correct and aggressively secular governments. Apparently, in this formulation, the State is determined to negate the particular religious significance of Christmas by forbidding Nativity displays on public land, banning Christmas pageants in public schools, and by referring euphemistically to “Holiday trees” and offering nondenominational “Season’s Greetings.”  All these, it’s said, deny the rights of Christian citizens to celebrate their faith, and ignore the historical place of Christian belief in North America.  Donald Trump stirred his base last year by announcing that White House greeting cards will once again contain the words “Merry Christmas,” thus liberating millions from the heavy hand of godless socialism.

This is bullshit.  There is no War on Christmas – there are the basic facts of the separation of church and state on which democracies are built, and of modern society’s being comprised of people who follow many and no religions. If governments take modest steps to include Buddhists, Muslims, Jews, Hindus, atheists and others in their annual December festivals, and to not unduly highlight one particular creed, that’s hardly a “war.”   December 25 remains a federal holiday in Canada, the US, and many other countries, and there are no restrictions on church attendance, turkey dinners, or mistletoe.

The War on Christmas concept is really an expression of the broad backlash against multiculturalism and other progressive trends which gained traction in the 1960s and 70s. Itself ascendant since the 1980s, some of that backlash has been, to my mind, reasonable: the virtuous social engineering that dismissed or disparaged anything resembling a “norm” has produced some unfortunate consequences.  Some policies of inclusion and egalitarianism, policies that sounded unimpeachably beneficial in theory, turned out to be more problematic in practice.  Some industries of victimology and grievance have arisen, embellishing frivolous personal complaints into noble demands for justice.  Some campuses teem with self-righteous vigilantes on the hyper-zealous lookout for racism, sexism, and homophobia.  It’s legitimate to question these intolerant standards of tolerance, but nobody should cite Christmas among their collateral damage.

Historically, there’s no denying that Europe and North America have been “Christian” civilizations for centuries.  But that doesn’t mean that every Christian custom deserves to be safeguarded by the law; otherwise we’d still sanction witch-burning and anti-Jewish pogroms. It’s also worth pointing out that many of the Founding Fathers of the United States, steeped in Enlightenment notions adopted from revolutionary France, were more Deist than Christian.  Ben Franklin and Tom Paine weren’t erecting creches in their town squares, and Thomas Jefferson didn’t regale his constituents with stories about wise men and shepherds.  Christmas may be part of our heritage.  It’s not the foundation of our society.

3 thoughts on “Total War on Christmas”