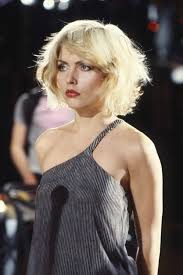 In their lives and in their memoirs, rock stars run the occupational hazard of having the most interesting bits clustered at the beginning, while the latter portions tend to feature a lot of belated self-reflection to compensate for the absence of much professional accomplishment.  Such is the case with Face It, by Blondie legend Debbie Harry, although her life and her memoir come with more hazards than most of her male peers’.  Give the lady some credit for recalling as much as she has, and for surviving as much as she did.

A strikingly beautiful woman in a genre known for affected ugliness, Debbie Harry became, not wholly to her chagrin, the pinup of punk.  Blondie, which she formed with her lover Chris Stein in 1975, achieved the worldwide mainstream popularity that mostly eluded contemporaries like the Sex Pistols and the Ramones, and she parlayed her photo- and telegenic visibility as the band’s centerpiece to an ongoing career as an icon of New York City cool; she and Blondie were pure products of NYC’s sleaziest, most dangerous pre-Giuliani nadir.  A lot of subsequent female pop celebrities have emulated Debbie Harry’s edgy urban style, but Debbie’s Face It story shows she was the real thing.  Born in 1945, she didn’t go punk on an adolescent whim or for a publicity stunt, but as an experienced adult.   Compared with her, to paraphrase Johnny Rotten’s sneer at Keith Richards, I wouldn’t piss on Madonna if she was on fire.

Yet Debbie Harry paid a price for that authenticity.  Her book is pretty candid about her sexual history, and for all the era’s liberated empowerment she enjoyed (“There I was, naked, spread, and very wet”; “One night, I did [a guy], upstairs at Max’s, in the phone booth”; “I made it with [David Johansen of the New York Dolls] once”), it feels lucky that she emerged from those years disease-free and alive:  she recounts escaping from a car driven by a creep who may have been serial rapist and murderer Ted Bundy, fending off a violently jealous boyfriend (who partly inspired “One Way or Another”), and a seedy sexual assault at the hands of a knife-wielding drug freak (she describes the black assaulter as “a dude – normally I never use this word,” making me wonder if her editors excised more incendiary language).  She had also been using heroin since before Blondie began, which didn’t help as management, money, and personal crises attended the act’s unexpected success.  More distinctive than skilled as a vocalist and songwriter, she was buffeted by the industry in ways that, say, Kate Bush, Chrissie Hynde, and Joan Jett weren’t, while the Marilyn Monroe act she consciously employed at the beginning of her rise became a Marilyn-like burden over time.

By the end of Face It, Debbie Harry reminded me a bit of Marlene Dietrich late in life – seen-it-all empress of bohemian chic and enduring sex symbol to generations – and a bit of Sunset Boulevard‘s Norma Desmond – isolated, slightly batty grand dame forever haunted by the memory of her glamorous younger self.  How much of the book’s text is really her writing and how much is her collaborators’, I’m not sure (some passages are more linear than others, and there are numerous pages of fan art portraits), but I don’t doubt the source of its final words, “I’m still a New York punk.”  I saw Debbie Harry perform with the Jazz Passengers in 1996, and I can attest that she was then, as she was before and continues to be now, lovely to look at and lovely to listen to.  To the fates that have knocked her around over the decades, I will only warn against inflicting further injury on a vulnerable, venerable rock ‘n’ roll goddess:  Hands off this one, sweetie.