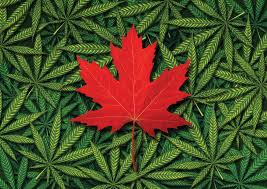 Bob Marley was once asked if he thought any national authority would ever legalize marijuana.  “I don’t know if this government will,” the reggae superstar reflected, “but I know Christ’s government will.”  If Bob’s ghost was to visit Canada today, where cannabis has been officially sanctioned since 2018, he may think he’d died and gone to heaven.

Since first outlawed in the US and elsewhere in the early 20th Century, the criminality of cannabis production and consumption has been one of the most futile and damaging policies afflicting democratic jurisdictions around the world.  Generations of pot smokers – disproportionate numbers of them poor and non-white – have been stigmatized as addicts, incarcerated as felons, and have lost jobs, families, and community standing, all for using a mild and organically occurring psychotropic drug whose short- and long-term effects are generally recognized to be less harmful than those of alcohol.  The wasteful War on Drugs has not been the biggest problem confronting western societies, but for decades it has been conspicuous as the easiest one to solve.  Now the Liberal government of Canada, and several state governments in the US, have finally taken the step which legal and medical experts, and common-sense citizens from across a political spectrum, were recommending before Bob Marley made his first record.

The very real justice of this legislation, though, may detract from something intangible in cannabis culture itself.  Millions of us who took recreational drugs when they were illegal gained an additional psychic buzz from their taboo status; the sense of participating in a secret underground, where initiates met in smoky apartments or secluded outdoor locales, was part of the sacred, ritualized pleasures afforded by cannabis and its derivatives.  Likewise, the trust established between sellers and buyers, or between strangers at a concert or a bar or an after-work party, created a joyful kind of communion unlikely to be replicated under a more tolerant regime.  Using a credit card to purchase a hydroponically enhanced specialty strain from a government-licensed dispensary on main street, however progressive, doesn’t have the social spirit of sharing a joint of homegrown in a dimly lit back room with Floyd or Hendrix on the stereo.

Indeed, some pre-legalization clinical studies of marijuana use concluded that the settings in which the drug was smoked formed at least some of the smokers’ mental responses – as with any natural substance whose properties vary from dose to dose, autosuggestion matters as much as chemistry.  Weed produced and retailed in sterile, state-sanctioned spaces and casually consumed in public, however potent technically, lacks a key ingredient abundant in the weed of the Beats, the Beatles, or Bob Marley.  The classic environment of pillowed couches, rock music, decorative pipes, and the fraternal intimacy of a few friends, may have been as integral to a cannabis high as the objective amounts of THC ingested.

It certainly was for me.  I have written about my history of consciousness expansion in my 2010 book Out Of Our Heads:  Rock ‘n’ Roll Before the Drugs Wore Off and elsewhere, but two quotes may sum up as much as needs to be said.  Talk show host Dick Cavett, from 1974:  “I got totally high, laughed hysterically at the idea of a clock, convulsed myself over the fact that carpets were rectangular, saw the deep and cosmic humor in fingernails, and had to gasp for air from hilarity induced by thinking about the alphabet and the fact that it contained only one n.  I had the total time-warp sensation that makes you start a sentence and forget on the fourth word what the point of it was – and not care, because you started the sentence at least fourteen years earlier and a lifetime of experiences and thoughts had intervened.”  And Jack Margolis and Richard Clorfene’s head shop bible A Child’s Garden of Grass, from 1969:  “After staring like idiots at [bad television] for eighteen minutes, someone will ask, ‘Why are we watching this stupid nonsense?’  You will all turn and smile and nod at the one who asked the question, then resume your watching, as will he who spoke, until the show is concluded.  Why?  Because a basic truth about being stoned is that everything is good.  Nothing is bad.”

Well do I remember personal variations on each of those scenarios, forever changed at what Hunter S. Thompson called “the place of definitions,” and I have happily retained an appreciation for the celestial absurdity lying just behind the veneers of ordinary existence.  But I probably won’t be patronizing any corporate cannabis outlets any time soon.  Though it is a welcome and long-overdue development, marijuana legalization comes decades out of date for many, and thirty years too late for me.

2 thoughts on “I Loved You Sweet Leaf”