One of the great things about the cinematic art, perhaps the greatest thing, is its popular appeal. You don’t have to understand the language of film to appreciate individual films; you don’t have to be a film geek to get geeky over your favorite actors, scenes, or filmed subjects. There are no doubt plenty of boxing fans who can’t tell a Bogdanovich from a Bergman but who still revere Rocky and Raging Bull, just as millions of sci-fi buffs may have never heard of the auteur theory but nevertheless know exactly why they love Close Encounters or Alien. In the same way, warbird aficionados – people who own, pilot, maintain or otherwise admire pioneering military aircraft – can cite any number of movies which, whatever their other qualities, best showcase the aviation and aviators of history’s greatest conflicts. 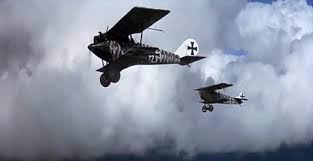 Aircraft and cinema both began at the dawn of the last century, and the inherent romance and excitement of flying made it natural material for the new medium. The first Academy Award for Best Picture went to the World War I spectacle Wings in 1927, and later black-and-white classics like The Dawn Patrol and Hell’s Angels romanticized the dogfights and daredevils of 1914-1918. Authentic (and dangerously achieved) footage of aerial action was interspersed with rear-screen projection shots of actors in prop cockpits. With the advent of World War II, in which aviation tactics and technology were deciding factors, standards of realism in filmed depictions of air combat rose, and in the postwar era and beyond, the production values of any movie about wartime flying grew correspondingly. The finest warbird pictures were big-budget epics that combined an accurate presentation of historical circumstances with exhilarating scenes of vintage planes in flight.

The development of Computer-Generated Imagery (CGI), however, has rendered actual airplanes and air-to-air photography almost obsolete. Of course CGI is a convenient and relatively cheap way for filmmakers to compose imaginative takes of rare equipment being maneuvered in ways which would be impossibly dangerous to secure in a physical space – but it has also become a crutch for directors who can devise shots no human pilots or cinematographers could ever achieve. So the flying scenes in Pearl Harbor (2001), The Aviator (2004), Flyboys (2006), Fortress (2012), Red Tails (2013) and Midway (2019) look more like immersive video games rather than unfaked cinematic records of genuinely functioning planes. At first glance, their vertiginous POV perspectives of aircraft crashing into the camera or torpedoes followed to their targets are stimulating, but after a while they are, all too obviously, mere simulations. Even in the age of Photoshop and AutoTune, we still retain a subconscious sense of what is a real onscreen object and what isn’t. The same goes for the overuse of CGI in every other genre, but moviegoers might forgive a digital Godzilla or a digital tsunami in a way they shouldn’t forgive a digital Fokker or Flying Fortress. For anyone with an emotional attachment to legendary propeller-driven aircraft and the legendary battles in which they were deployed, here are ten films which truly put the sky on screen and which continue to make the senses truly soar. 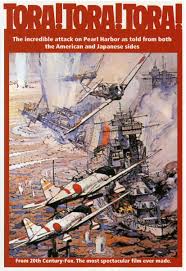 Tora! Tora! Tora! (1970; d. Richard Fleischer)   Widely remembered as an expensive establishment flop when it premiered in the countercultural heyday of Easy Rider and M*A*S*H, this long and lavish recreation of sneak attack on the US naval base at Pearl Harbor by Imperial Japan on December 7, 1941 has subsequently earned recognition as one of the most technically impressive war movies ever made.   Casual viewers might lament the lack of a fictionalized subplot à la From Here to Eternity, but dedicated history scholars will value the meticulous, hour-by-hour buildup of secret Japanese machinations and isolated American suspicions – each side filmed by camera crews of the respective nations whose politicians and military staff are shown – that climaxed in the Day of Infamy. 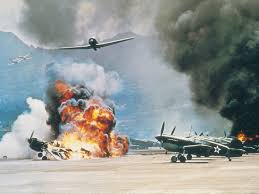 Tora! Tora! Tora! is centered around a visually staggering portrayal of the bombing of Pearl Harbor, featuring the early-morning aircraft carrier takeoff and devastating strafing and torpedo runs by Japanese planes, as well as taut moments of defensive responses by US P-40 fighters and a genuinely breathtaking belly landing by a B-17 bomber. Purists might notice that the “Japanese” machines were actually modified American 1940s-era Harvard and Vultee trainers, and for practicality the P-40s seen destroyed on the ground were fiberglass mockups, but the overall cinematography, editing, special effects and stunt flying put into service here are unparalleled (some of the choicest footage from the movie was later seen in lesser Pacific war stories like Midway and The Final Countdown).   If Tora! Tora! Tora! doesn’t try for the character histrionics emphasized in other war pictures, the exacting factual details and stunningly choreographed aeronautics more than make up for it. 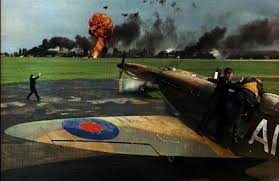 Battle of Britain (1969; d. Guy Hamilton)   Probably the only rival to Tora! Tora! Tora! for the scope of its story and for the number of warbirds it amassed before the camera, this was a costly Longest Day-style effort to compress a grand historic episode into a single, semi-dramatized narrative. Thus there are numerous fighter pilot parts for young British stars of the time including Michael Caine, Christopher Plummer, Robert Shaw, and Ian McShane, and big cameos as Royal Air Force leaders for legends Laurence Olivier and Trevor Howard, on top of parallel scenes with their subtitled German adversaries. 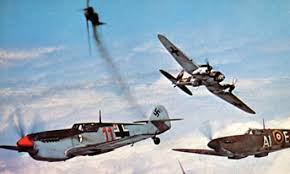 Once the film is airborne, though, the celluloid clashes of RAF Spitfires and Hurricanes versus single-seat Messerschmitt 109s and Heinkel 111 bombers are truly stupendous; producer Harry Saltzman’s assembly of aircraft during the shooting temporarily comprised one of the largest air forces in the world. While models and rear projection facilitated some of the displays, the majority of the dizzying aerobatics are performed by the real thing (most of the “German” planes were loaned by the government of Spain, a former Nazi client). The Luftwaffe’s brutal Blitz on London is documented in all its human horror, while the resilience of British airmen and civilians is well captured by William Walton’s theme music. And if some of the massed Spitfire attacks on German raiders seem a little familiar, remember that George Lucas used several sequences from the picture as a ready-made storyboard for his TIE fighters pursuing the Millennium Falcon in Star Wars. 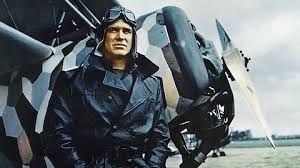 The Blue Max (1966; d. John Guillermin)   This exciting and unashamedly pulpy tale of a German fighter squadron in World War I stars George Peppard as the upstart newcomer, James Mason and Jeremy Kemp as his aristocratic superiors, and a magnificently towel-draped Ursula Andress as the woman they love. Much of the subplot concerns the class prejudices and codes of military honor which the war would make outmoded, well caught by casting the American antihero Peppard against the refined Englishmen Mason and Kemp. Although the planes shown are a motley and occasionally anachronistic assortment of types (surviving craft from the period are all but extinct), the dogfights seen here are as good as they come; Peppard even did his own piloting in a few notable shots. A fun aerial adventure, concluding with a downbeat message on ambition and the false glory of war. 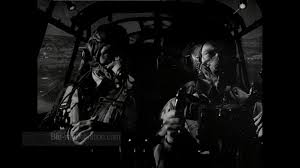 The Dam Busters (1955; d. Michael Anderson)   A powerful depiction of the audacious low-level attack on key German installations by the RAF in 1943, utilizing an ingenious “bouncing bomb” designed by unconventional British engineer Barnes Wallis (an effective Michael Redgrave) and delivered by crews led by Wing Commander Guy Gibson (Richard Todd, in his most famous role). The raid itself is filmed with a combination of models, optical effects, and real bombers – the mighty four-engine Avro Lancasters – swooping dramatically over water. The Dam Busters was another visual reference for Star Wars, and in some parts of the Death Star assault it’s quoted almost line for line. There’s long been a rumored remake in the works, with Peter Jackson directing, but Gibson’s documented use of the N-word for his dog’s name grates on contemporary ears.

Catch-22 (1970; d. Mike Nichols)   Though critically disparaged for failing to convey the sprawling war-is-madness theme of Joseph Heller’s novel, Nichols and his team did bring to life the terrifying reality of flying bombing missions by gathering a sizable flight of working B-25 Mitchells (tragically, an assistant director died after falling from an airborne Mitchell during production) and having sunny Mexico stand in for the Mediterranean theater of World War II.   The process shots of Yossarian (Alan Arkin) and his mates (including Martin Sheen, Bob Balaban, Charles Grodin, and even Art Garfunkel) inside their planes are surprisingly realistic, and one long take of a B-25 skidding to a crash behind an oblivious Jon Voight and Martin Balsam is an amazing feat of camerawork, acting, and airmanship.  Better than the recent CGI-heavy miniseries. 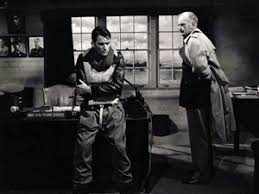 Twelve O’Clock High (1949; d. Henry King)   The often wooden Gregory Peck is note-perfect here as hardheaded General Frank Savage, taking over a beleaguered US heavy bomber unit of the Eighth Army Air Force and whipping his crews into shape – his scathing monologue directed against his cowardly subordinate Gately (Hugh Marlowe) will still nearly peel the paint off the barracks wall. While most of the flying footage consists of actual battle film from US raids over Europe, there’s a brilliant B-17 pancake landing executed specially for the film. A two-fisted saga of duty, strategy, and the stresses of command. 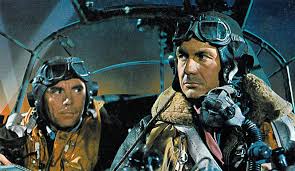 633 Squadron   (1964; Walter Grauman) Though the plot seems to echo the assault-on-impregnable-target premise of The Dam Busters, it’s a treat to see the sleek DeHavilland Mosquito fighter-bombers on film. Cliff Robertson, himself a licensed pilot, plays an RAF aviator leading a near-suicidal raid on a secret rocket fuel complex deep in German-occupied Norway; George Chakiris of West Side Story makes an unlikely fighter in the Norwegian underground. The storyline may be clichéd, and the special effects dated, but the authentic shots of three twin-engine “Wooden Wonders” speeding through a narrow fjord – again, shades of X-wings in the Death Star – make it well worth a watch. 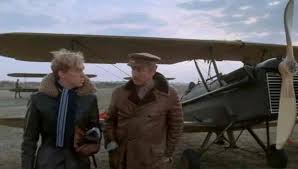 Aces High (1976; d. Jack Gold) An aerial adaptation of the World War I play Journey’s End, a strong cast including Malcolm McDowell and Christopher Plummer show the savage attrition rates faced by pilots in the conflict – most active fliers had life expectancies of only a few weeks. Although, like The Blue Max, the accuracy of the production planes’ makes and color schemes can be critiqued by experts, the emotional trauma and physical hazard of the earliest dogfights (parachutes were seldom worn and aircraft were highly flammable under attack) is truthfully brought home, and the numerous battle scenes in the clouds keep the viewer involved. 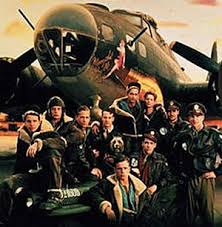 Memphis Belle (1990; d. Michael Caton-Jones) This fictionalized version of William Wyler’s wartime documentary on the first Flying Fortress crew to survive the required 25 missions anticipates Saving Private Ryan in highlighting both the youth of the characters and the sheer terror they experienced while fighting. A handful of operational B-17s, Messerschmitt 109s, and P-51 Mustangs were gathered to approximate the vast armadas which flew and fought over Germany circa 1943, and we get a hair-raising view of one of the big Boeings falling victim to a withering fighter pass. Some of the on-board exchanges between the Belle’s boys may be overdone, but nice acting turns from Matthew Modine, Eric Stoltz, and D.B. Sweeney make the heroism of twenty-three-year-old airmen newly appreciable decades later. 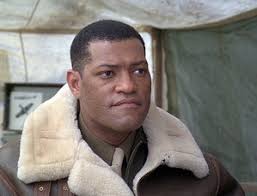 The Tuskegee Airmen   (1995; d. Robert Markowitz) Originally aired on HBO to give an overdue account of the racially segregated all-Black US fighter squadron in World War II, this thoughtful study features Laurence Fishburne and Malcolm Jamal-Warner portraying composites of the dedicated African-American pilots who fought both Luftwaffe opponents and bigoted whites on their own side. Several remaining P-51 Mustangs were on hand for the well-made flying sequences, as well as Messerschmitt 109s and B-17s; the same subject was covered in Red Tails but the in-flight drama and the painful social history is better realized here.