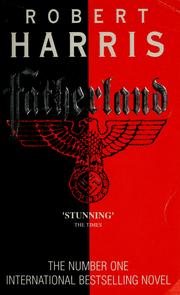 Though there have been many counterfactual histories premised on alternative scenarios of World War II, among them Philip K. Dick’s The Man In the High Castle (1962), Len Deighton’s SS-GB (1978), and Philip Roth’s The Plot Against America (2004), my vote for the most convincing goes to Robert Harris’s 1992 thriller Fatherland.  Set in the heart of a Nazi empire in 1964, the novel’s expository depiction of a world where events after 1942 took a very different trajectory than the one we know today forces a reconsideration of the last eight decades of geopolitical reality.  Some editions of Fatherland close with a chilling epigram from Dante Gabriel Rossetti:  “Look into my face; My name is might-have-been.”

In Harris’s vision, Hitler’s Germany has defeated Stalin’s Soviet Union and absorbed all of Europe west of the Urals (including Britain under a reinstated Edward VIII) into its economic sphere.  Since 1946 the Third Reich has been locked in a nuclear-armed Cold War with the United States, led in 1964 by President Joseph P. Kennedy, but diplomatic efforts are under way to secure a détente between the two superpowers.  Fatherland is a murder mystery about a Berlin detective and an American journalist uncovering a top-level Nazi scheme to eliminate any party functionaries whose incriminating knowledge of official policies might derail such overtures – that is, knowledge of the Final Solution, which has already been secretly and successfully carried out by the Germans.

The ideological implications of this background are provocative.  In the real 1964, the horror of the Holocaust was widely known, fascism was thoroughly discredited, and Hitler and his henchmen were synonyms for evil.  The USSR, meanwhile, was a formidable economic and military rival to the West, and some Western leaders and thinkers were willing to accept a “peaceful coexistence” with what then seemed to be a viable system of governance.  The most rabid anti-Communists, on the other hand, were themselves suspected of harboring fascist sympathies.  Fatherland, written shortly after the Soviet collapse, inverts these alignments:  the story posits that Stalin’s ruinous purges and famines are familiar to everyone, that the murder of Europe’s Jews is just a rumor mostly dismissed as Red propaganda, and that American political classes, including President Joe Kennedy himself, give grudging credit to Nazi efficiency (the Germans are winning the space race, for example).  The strangling of Britain and the establishment of a technologically advanced, continental police state under the swastika is enabled by the Wehrmacht’s triumph on the Eastern Front in 1943, something which came awfully close to happening in our own universe.

Aside from how profoundly a realized Fatherland would have affected hundreds of millions of Europeans, it would thus also have remade generations of liberal-versus-conservative dialogue in the US, with hawkish anti-Aryans clashing with supposedly fellow-travelling Nazi stooges.  American political culture would be unrecognizable today, if candidates commonly accused one another of being soft on fascism.  The threatened revivals of autocracy and right-wing extremism we face in 2020 might be muted had the Third Reich fallen more recently than 1945 – Harris’s narrative hints that younger reformers are poised to take over from the aging Nazi elite, perhaps leading eventually to a German glasnost and a German Gorbachev – though, on the other hand, the distant memory of Soviet-style authoritarianism might be enjoying a contemporary revival.  The factual and imagined histories of the Twentieth Century’s second half, each full of conflict, mistrust, and repression, may have played out to parallel conclusions (in which the United States ultimately won each Cold War), but with the standard casts of villains, victors, and victims wildly rearranged.  At least one influence is present in both versions, however:  banned as decadent bourgeois corrupters of youth in the USSR, the same four Englishmen’s “pernicious, Negroid wailings” are condemned in the Nazi press of Fatherland.  Totalitarian dictatorships come and go, it seems, but the Beatles are forever.

2 thoughts on “Our Possible Pasts”