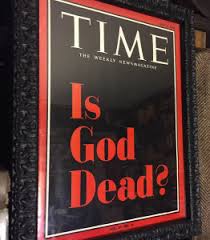 This week marks the 55th anniversary of Time magazine’s famous cover story, “Is God Dead?” Today, as newspapers and magazines struggle for readership and relevance, it’s hard to imagine how a weekly print journal could much affect popular sentiment, but in April 1966 Time was virtually an arbiter of middlebrow American opinion and morals.   Its stark questioning of the deity’s reality was the first time the mass-market periodical had not been fronted by a portrait of a human newsmaker, and was hugely provocative on the newsstands and library shelves of the era.  In the end, of course, it’s impossible to confirm whether or not God has expired, but there’s no doubt that the matter of His whereabouts has haunted us for five decades.

At least.  The death of the supreme being, a concept with obvious implications for believers, had been posited by Friedrich Nietzsche in his 1882 work Die fröhliche  Wissenschaft (The Gay Science); the notion that God as an invisible entity “died” as faith in Him declined had been discussed ever since.  Time‘s 1966 article, “Toward A Hidden God,” merely revived the idea in the age of the Great Society, the space race, and psychedelia.  Written by the magazine’s theology editor, John T. Elson (though no byline was given), the article reported on clergymen who practiced good works without observing the central tenet of their institution.  “If nothing else,” Elson wrote, “the Christian atheists are waking the churches to the brutal reality that the basic premise of faith – the existence of a personal God, who created the world and sustains it with his love – is now subject to profound attack.”

Though “Toward A Hidden God” typified the Time method of cultural journalism – extrapolating a nebulous “movement” from selective facts and quotes – the impact of the piece, and especially of the cover that advertised it, was undeniable.  Over 3000 pro and con readers’ letters were received in response, and the issue was the magazine’s biggest seller of the year (its circulation was then 4.5 million a week).  A generation later, the “Is God Dead?” controversy was still widely recalled as a news story in itself, even turning up as a question in the 1980s board game Trivial Pursuit.  But its greatest influence came in the years immediately following April 1966, and took on a surprising character.  If God had died, His main enemy was due for a resurrection.

For the rest of the 1960s and throughout the 1970s, one of the biggest indications of a possibly Godless society was the new visibility of the occult.  Witchcraft, astrology, unexplained phenomena, demons, devil worship – all became hot topics for public discourse and commercial exploitation.  And there were at least a few direct links between the question posed by Time and the answers offered by the occult boom.  Ira Levin’s groundbreaking 1967 novel Rosemary’s Baby, about a coven of urban witches conspiring to bring Satan’s child into the world, had the “Is God Dead?” issue turn up in a doctor’s waiting room, and climaxed with the chief villain exulting “God is dead and Satan lives!” (Both bits were retained in the hit 1968 movie adaptation.)   Even more successful were the 1971 bestseller and 1973 blockbuster The Exorcist, a story of demonic possession first conceived by author William Peter Blatty as a roundabout testimony for religious faith. Explaining his theme to a literary agent, Blatty summed up the contemporary view of God in the absence of miraculous intervention:  “He isn’t dead, and he isn’t alive in Argentina. He simply never lived.”   Even the color scheme of the Time cover – red and white letters against a black background – became the standard motif for the packaging of occult-related books, movie posters, and record albums.   Magazines, horror cinema, and popular spirituality have undergone many changes in the last fifty-five years, but we continue to ponder the imponderable speculation raised so graphically on April 8, 1966.