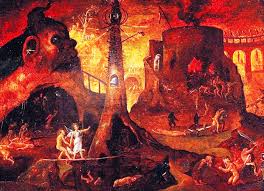 The games of the DCLXVI Olympiad were opened in the host city of Hell last night, in a nightmarish ceremony that could have been directed by Hieronymus Bosch – and, indeed, was. A stirring chorus of “It’s a Small World After All” began the spectacle, sung by 20000 unbaptized children as they were roasted on red-hot skewers, followed by a special “Salute to the Military,” performed by Adolf Hitler, Joseph Stalin, and Osama bin Laden from a huge vat of molten lava.

The evil festivities continued with a tribute to Hollywood villains, featuring appearances by Dracula, Freddy, Jason, Pazuzu from The Exorcist, and the hillbillies from Deliverance. In a showstopping central display, the five Olympic rings were formed from rivers of human blood poured by Saddam Hussein, Pol Pot, Idi Amin, Augusto Pinochet and Mao Tse-Tung, who were then forced to devour their own entrails to the accompaniment of 10 million car alarms. The affair gathered momentum as a “classic rock” group consisting of AC/DC’s Bon Scott, former Ozzy Osbourne guitarist Randy Rhoads, the Sex Pistols’ Sid Vicious and Led Zeppelin’s John Bonham played a ninety-minute rendition of “Hey Jude” while a hand-picked army of 100000 murderers and thieves simultaneously vomited and defecated into a giant pentagram-shaped swimming pool.

Costing an estimated 500 trillion dollars and an untold number of souls, the amazing show hit a peak with a fireworks display made from thermonuclear explosions, which wiped out all living things (excluding Olympic competitors) within a range of 2000 miles.  No expense was spared to convey the sheer majesty, nobility, and pointlessness of watching organically animated product placements race, chase small objects, and submit to arbitrary aesthetic judgements against each other.  Naturally, visitors from the various nations of Earth were represented among the spectators, all of them supporting different so-called “teams,” which were organized on the basis of ethnic and geopolitical alignment.  Note:  this phenomenon is in no way related to the longstanding tradition of armed conflict between social groups.

Next the athletes of the world entered the vast Anton LaVey Stadium and were immediately thrown into an abysmal lake of fire. Much weeping and gnashing of teeth was heard during the All-Star parade of serial killers, with Ted Bundy, Jack the Ripper, Gilles de Rais and Peter “Vampire of Dusseldorf” Kurten re-enacting their crimes with freshly arrived sinners who will be suffering for all eternity. In a surprise highlight, mass murderer Dylann Roof made a brief speech via satellite from his home on Earth.  “I look forward to my arrival there,” he declared. Finally the Olympic torch was lighted by former NHL enforcer Derek Boogard and Satan, Prince of Darkness, declared the games open. Officials of the International Olympic Committee were then sentenced to watch a nonstop historical overview of past Olympic opening ceremonies until the end of time.