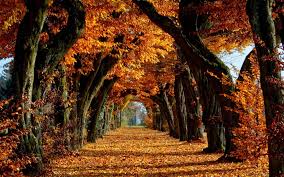 Autumn is my favorite of the seasons, for its natural elements and, inextricably, for the human responses we have projected on to them.  It is the time of John Keats’ “Ode to Autumn” (O season of mists and mellow fruitfulness...), of Guns n’ Roses’ “November Rain,” the jazz standard “The Falling Leaves,” and the iconic Canadian painting The Solemn Land, by the Group of Seven’s J.E.H. MacDonald.  Fall is also, of course, the season most suited for Edgar Allan Poe’s “The Raven,” Ray Bradbury’s Something Wicked This Way Comes, and H.P. Lovecraft’s “The Shadow Over Innsmouth,” the weeks when cold winds and long nights return us to that primal state of dread – dread of hunger, dread of darkness, dread of death – that haunted our ancestors since before history began.

But our experience of seasonal change, and the culture which derives from it, may be one of our few remaining ties to the organic world, and that tie continues to weaken. Halloween, the pagan-Christian festival which climaxes autumn, seems to belong to old New England or a Norman Rockwell-like midwest; it can’t have the same resonance in the suburbs of Vancouver or the gated communities of Phoenix and Houston.  A haunted house, likewise, should be at least a hundred years old, with a long register of deceased former occupants; a haunted bungalow or condominium doesn’t have the same mystery to it. Halloween is evoked by spindly bare branches, creaking shutters, and a full moon. Manicured lawns, satellite dishes, and motion lights separate us from nature and from its associated traditions.

Like Christmas, Halloween is a supposedly ancient ritual, but most of the Halloween customs we observe are, in fact, relatively recent.  And as with Christmas, even those Victorian-era trappings may eventually be discarded in the Twenty-First Century.  Ghosts are no longer shrouded apparitions but paranormal phenomena captured on video. Vampires are no longer elegant European noblemen but sexy high schoolers.  Bats are not nocturnal predators but a species endangered by pesticides and development. And witches are not practitioners of black magic or consorts of Satan but feminist New Agers. Even seventy years ago, the staples of Halloween dress and decoration were throwbacks to an imagined past – they are all but obsolete today.

Monsters and magic, indeed, can hardly be classed as “superstitions” in 2022. Urban legends, celebrity rumors, and conspiracy theories abound, but serious belief in werewolves or goblins is negligible. Zombies, so familiar through The Walking Dead graphic novel and TV series, belong to pop more than folk culture.  And the very premise of a restless afterlife, which must have haunted people in ages where children and adults died from all causes all the time, has lost some of its power now that death mostly happens to senior citizens in nursing homes.  What sociologist Max Weber called “the disenchantment of the world” is seldom more evident than during the plasticized commercial hype of Halloween.

Along with Thanksgiving – a harvest celebration in a society with 24-hour grocery stores and where very few people live on farms – Halloween honors a natural transition we can otherwise safely ignore. Humanity has pretty much conquered nature, in some places even destroyed it, at least in the big cities where most of us reside:  why pretend to be afraid of it?  Yet as long as we still harbor those primordial fears of spirits, devils, and the coming of winter, it remains a point on the calendar gratifying to mark, however shallow and distorted the marking has become.

One thought on “End of Days”