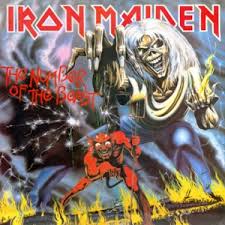 Fans of heavy metal and horror movies should be familiar with the Antichrist, the Biblical character whose arrival on earth is said to foretell the end of the world; the same fans may be surprised to learn that their understandings are inaccurate.  The Antichrist appears exactly once in the Bible, in the First Epistle of John (Chapter 4, Verse 3):  “And every spirit that confesseth not that Jesus Christ is come in the flesh is not of God; and this is that spirit of antichrist, whereof ye have heard that it should come; and even now already is it in the world.”   Yet the title is often assumed to be interchangeable with that of the Beast, from the apocalyptic Book of Revelation.  Why the confusion?

Historians of religion have long sought to decipher the allegorical meanings found in the imagery of the New Testament. Much of the original language of Christianity was a coded message to adherents of what was then a vulnerable and persecuted cult within the Roman Empire, and the Book of Revelation, by John of Patmos, was in some ways a kind of samizdat against imperial power (this John, incidentally, was not the same as the supposed apostle of Jesus and author of the fourth Gospel).  Its point was not so much to predict the future as to urge resistance in the present.  For example, the infamous “number of the beast,” 666, is believed to secretly identify the Emperor Nero through the Hebrew and Aramaic numerical systems, and some experts suggest the more precise translation is 616.  Nowhere is it said that the Antichrist and the Beast are one and the same. While the Book of Revelation has been studied and debated for centuries, its greatest influence on today’s popular culture has derived from its most recent interpretations – and the most distorted ones.

One key document of this revival is Ira Levin’s 1967 novel Rosemary’s Baby, which posited an ordinary woman delivering a child fathered by Satan himself.  A clever parody of the Christian narrative – Rosemary is not a virgin, a relative is pregnant with a male child at the same time she is, and her baby arrives on June 25, as far away from Christmas as the calendar allows – the book suggests the infant is destined to “redeem the despised and wreak vengeance in the name of the burned and the tortured,” without quite invoking Revelation’s Beast.  In 1976 a successful film, The Omen, made the Biblical connection more explicit, as a mysterious child adopted by an American couple is said to be the young Beast himself.  The Omen mixed allegedly ancient prophecy and churchy-sounding exposition with violent cinematic shocks, and generated several sequels in which the maturing boy Damien moves closer to assuming his role as the eventual Antichrist.  Perhaps most impactful in establishing mass interest in the subject were American evangelist Hal Lindsey’s bestselling tracts The Late Great Planet Earth (1970) and Satan Is Alive and Well on Planet Earth (1972), which claimed the events described in Revelation were manifest in contemporary geopolitics, and that the arrival of a Damien-like 666 / Beast / Antichrist was imminent.  The Left Behind Christian book series (1995-2007) places the Book of Revelation even more literally in current events, wherein the sinister foreign leader Nicolae Carpathia is the Antichrist figure.

None of this bears any relation to serious Biblical scholarship.  Theologians class the particular focus on Revelation and purported “end times” as Dispensationalism, a strain of Protestant thinking which other faiths mostly ignore, and which has found its most committed practitioners in the United States.  Certainly the coming of an evil messiah whose every quality mimics those of Jesus – born to a mortal mother, like Rosemary’s baby; raised by unsuspecting parents, like Damien; bound for worldwide fame, like Nicolae Carpathia and Hal Lindsey’s alive and well Satan – was easily accepted by Americans already locked in an oppositional cold war with the godless nuclear-armed evil empire of the USSR or, latterly, Islamic fundamentalism.  Likewise, the pop titillations of inverted crosses and reversed lyrics of rock songs reinforced the “Anti” aspect of the Antichrist.  In any case, the whole thing is more a product of exploitative entertainment, faith-based bigotry, and nationalist paranoia, than of any enduring messages about peace on earth and good will toward men.  Samtsirhc Yrrem.

2 thoughts on “Pro- and AntiChrist”