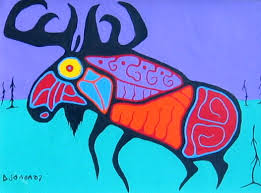 Recently the issue of cultural appropriation has set off two Canadian episodes of what can plausibly be called censorship.  In the first, a non-Native painter, Amanda PL, had her Toronto gallery exhibit cancelled because her canvases paid tribute to the colorful visuals of famous Ojibway artists like Norval Morriseau and Joshim Kakegamic. In the second, Hal Niedzviecki, editor of the Writers’ Union of Canada’s newsletter Write, was forced to resign for an editorial in which he noted, “In my opinion, anyone, anywhere, should be encouraged to imagine other peoples, other cultures, other identities.  I’d go so far as to say there should be an award for doing so – the Appropriation Prize…”  Both cases raised an outcry of Indigenous and non-Indigenous protest, accusing PL and Niedzviecki of exploiting Aboriginal voices and styles (or encouraging same) at the expense of actual Aboriginal people, who remain a disproportionately vulnerable segment of Canadian society.

“Cultural appropriation” is a nebulous term that can mean anything from old blackface minstrel shows to the Native-derived logos of numerous pro sports teams (the Cleveland Indians, the Chicago Black Hawks, the Vancouver Canucks, etc.).  It is a charge mostly, perhaps always, leveled at white people, insofar as a dominant majority is said to have taken advantage of minority motifs for fun and profit:  whereas a Native person who (say) uses a computer is merely trying to survive in an overwhelming alien environment, a Caucasian who (say) incorporates Native designs into her paintings is a colonialist dilettante depriving Natives of one of the few things they can claim as their own unspoiled heritage.

In the wake of the controversy, numerous pundits of diverse backgrounds have struggled to explain why cultural appropriation must be stopped. “We have to understand that cultural appropriation is institutionalized, it is the very foundation of what Canada is built on,” CBC commentator Jesse Wente said. “And not just cultural appropriation, but appropriation of all things Indigenous…None of us that I’ve seen want to limit free speech.”  In the Toronto Star, columnist Shree Paradkar added, “Appropriation is not about artistic licence or freedom of expression.”   Yet the rejoinder to such denunciations might be, “Or else what?”  If a creator characterizes a culture not their own with a lazy stereotype – not obscene, not libelous, not threatening, just lazy – do we call the police? Wente’s foundational critique also sounds dubious, in a country which for decades has launched costly government initiatives addressing Native concerns.  If anything, it is anti-cultural appropriation that has been institutionalized in Canada.

I hasten to say I have no particular interest in the artistic explorations of Amanda PL, of whom I’d never heard previously, nor the career of Hal Niedzviecki, nor the Writers’ Union of Canada.  Niedzviecki has written insufferably pretentious hipster tracts titled We Want Some Too:  Underground Culture and the Reinvention of Mass Desire and Hello, I’m Special:  How Individuality Became the New Conformity, and a year-long membership in TWUC did little good for my own literary career.  These people are not Salman Rushdie or Charlie Hebdo.  But intimidating them from showing or publishing what they think about other cultures does absolutely no good for the cultures in question, which presumably is the whole reason for the intimidation.

Cultural appropriation – or rather the public shaming of it – is really a political ploy rather than a social problem.  By broadening the definition of bigotry to encompass any subjectively offensive deed or statement, Natives can indefinitely invoke a perceived injustice no outsider can dispute.  For a long time, injustice meant tangible barriers like laws and customs which actively discriminated against certain groups; then it meant intangible prejudices which subtly demeaned or excluded them; now injustice means whatever allows anyone to blame anyone else for their troubles.  Cultural appropriation meets this last criteria well.  Even if you don’t mean any harm, even if you’re as admiring as Amanda PL or as open as Hal Niedzviecki, you still make a convenient villain, all for looking at others the wrong way.  Except the sheer opportunism of the concept, the illiberality of the reactions, and the futility of their purpose, suggests that those who condemn cultural appropriation are once again victims only of their self-conferred, self-marginalizing victimization.