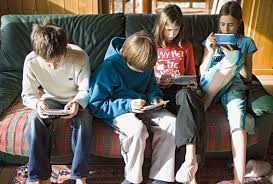 If you’re reading this online – but where else would you be reading it?

Our contemporary levels of attachment to electronic media – PCs, laptops, cell phones, Ipads, Blackberrys, tablets, all of that – have long been generating a cautionary undercurrent of criticism from sociologists and psychologists, asking how our connection with the wired world may be straining our inborn ties to the old one. What does it mean, intellectually and spiritually, to spend so much of our waking existence staring at monitors and clicking on links?  What does constant engagement with computers do to our personal relationships and our physical beings?  What happens to our long- and short-term memories, our emotional instincts, and our basic processes of reasoning, after two or four or twelve hours on Google, Facebook, or YouTube?  And if adults are being affected by surging amounts of daily screen time, how much more so are kids?

Of course, over the centuries, similar questions have been asked with the advent of any new media. Our great-grandparents fretted over little Bobby and Sally glued to the radio or obsessing over Flash Gordon movie serials; their distant ancestors probably lamented how young Ebenezer and Philomena couldn’t get their noses out of penny-dreadful novels.  The obvious answer (Marshall McLuhan was the first to raise his hand) is clear:   each new technology, and not just communications technology, definitely changes the mentalities of those who use it.  Distance meant something different to people who traveled by horse than it did to people who traveled by cars; time accelerates if you have a daily newspaper instead of a town crier; intimacy in love letters is not the same as intimacy over the phone.  Somehow, through all of these developments, humanity has carried on.

Yet computers and the Internet seem to be changing the inherent functioning of the human mind at a far more rapid rate than anything seen before.  As someone who has worked with children, I’ve seen the hypnotic attraction of video games and social networking firsthand.  What holds kids to their devices is less the content of whatever they’re looking at, but the very act of sitting down and moving a cursor around:  their need to do something, anything, with a mouse and a keyboard and a screen resembles nothing so much as addiction.  Children become restless and agitated when denied computer time, they “zone out” for eye-glazing hours while engaged with their games or their messages, and they sometimes have to be physically pried away from their station when it’s time to turn it off. Maybe it was the same when I wasted my after-school hours staring at Gilligan’s Island or The Flintstones, or my old Atari system, but today’s digital tech has become so much part of our everyday work, learning, leisure, commerce and connecting it’s that much harder to get away from.

This quality of dependency has already been observed by, among others, Nicholas Carr in The Shallows:  What the Internet is Doing to Our Brains (2010). Carr and similar commentators worry that our fundamental abilities to quietly sit and read a book for an hour or two, to have a sustained face-to-face verbal conversation with another person, even to hold a steady thought that can be sensibly expressed, may be slipping away from us – all because the immediacy and infinite distractions of computers are shriveling the mental muscles which have hitherto enabled us to concentrate on delayed objectives, abstract ideas, and problem solving.  In the same way that most of us now get food from a supermarket, without knowing anything about agriculture or raising animals, many young people now assume knowledge comes from a computer, without knowing what it truly is to learn, remember, and ultimately to think.

In ten or twenty years we will see what effects such early and incessant immersion in computerized stimulation produced in adults.  Perhaps, like every previous generation, today’s permanently plugged-in kids will grow up to run their lives, and their world, no better or worse than their predecessors, and run it that way precisely because they spent so many childhood hours on Minecraft, Instagram, Bitstrips, and their competitors.  I hope so, but if they mature into a race of attention-deficient psychological cripples with no capacity for sequential logic or solitary reflection, we’ll know who and what to blame.

2 thoughts on “Throwing Up Digital”