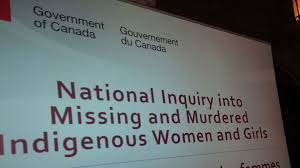 Canada’s National Inquiry into Missing and Murdered Indigenous Women and Girls (MMIWG), after several high-profile resignations, dismissals, and criticisms from its remaining commissioners, limped to a final report in 2019; a National Action Plan stemming from the Inquiry has just been released and has itself been roundly criticized from within and without.  The MMIWG inquiry was launched in 2016 to, in its official wording, “examine and report on the systemic causes behind the violence that Indigenous women and girls experience, and their greater vulnerability to violence, by looking for patterns and underlying factors that explain why higher levels of violence occur.”  All observers agree that Canadian Native women are disproportionately represented among victims of murder and domestic abuse, and that in isolated regions (such as northern British Columbia) there remain too many troubling cases of Native women’s disappearances, unsolved or unaddressed by police.  Yet the Inquiry and its Action Plan seem to have fallen victim to the usual suspects of mismanagement and paternalism which have been hurting Canadian Natives for a long time.

Here are some of the other public programs or directives which predate and anticipate the MMIWG Inquiry:  the Truth and Reconciliation Commission over the discredited Native residential school system (concluded in 2015); the Prime Minister’s Statement of Apology for the same system (2008); the Federal Government Statement of Reconciliation (1998); the Royal Commission on Aboriginal Peoples (1991-1996); the Official Apology by the Anglican Church of Canada for its part in operating residential schools (1993); the Special Parliamentary Committee on Indian Self-Government (1983); and the Indian Claims Commission (1969-1977).  Numerous other well-publicized federal and provincial acts, court decisions, and formal statements have also addressed Native issues over many decades.  Yet during the same period, Canada’s Indigenous people have remained conspicuously affected by poverty, addiction, suicide, incarceration, and other social pathologies.  Something is obviously not working, for Natives and for Canada as a whole.

It would be churlish to characterize the MMIWG Inquiry, and now its Action Plan, as merely more cynical make-work photo ops from which nothing worthwhile results.  The confirmed cases of Native females vanished or killed are genuine enough, as is certainly the grief of the women’s relatives and supporters.  Perhaps it’s more accurate to just call the Inquiry habitual – a reflexive response to real conditions, driven by an entrenched complex of politics, social work, legalism and bureaucracy which has grown around Canada’s Indigenous community for years.  This has amounted to a kind of inverted, idealistic apartheid, whereby Natives are kept culturally and economically separate from other citizens out of a misguided sensitivity to their unique status as Canadians.  The recent revelation of an unmarked mass grave of Native children at a former residential school in BC, for all the trauma it signifies, may in its turn lead merely to further inquiries, further commissions, further apologies, and further separation.

There is no reason on earth why individual Native people cannot become scientists, pilots, doctors, entrepreneurs, engineers, or other middle- and upper-class professionals; plenty already have.  Yet the orthodoxy of Aboriginal activists and non-Aboriginal apologists holds that Natives are so burdened by history that they cannot hope to succeed in a modern society without an initial – some might say indefinite – phase of overcoming the legacies of racism and colonialism.  Generations of Natives have grown up receiving messages about what they are owed, or about what has been done to them, rather than what they might do for themselves.  Where other populations teach the link between effort and reward, First Nations lessons emphasize the link between complaint and compensation. As a consequence, many Canadians of Aboriginal ancestry have been reduced by non-Native officials and their own leadership class to wards of government.  Who knows how many potential mathematicians, dentists, librarians and businesspeople has Canada lost because young Natives were subtly and explicitly told to defer their personal ambitions until the larger group got its due in a legal verdict, or an official redress, or a financial settlement?  The MMIWG Inquiry and its Action Plan – things meant as advances, but increasingly faulted for their supposed failings – may become only variations on a recurring theme.  With the Inquiry wound down to a sad and futile conclusion, it appears to have followed the template of so many Commissions, Reports and Apologies before it: serving less to solve old problems than to claim new excuses for them.