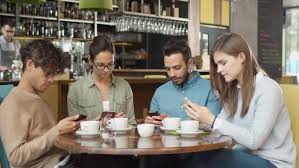 Apparently one measure of the social distancing we’ve been enjoined to observe for nearly two years now can be confirmed by data tracking of people’s digital devices – analytics show that we have indeed followed orders and stayed home.  Underneath that story, however, is the more dubious news that a majority of citizens can quite literally be found connecting to the world and each other with the smartphones they take everywhere they do and don’t go.

I’m not one of them.

Obviously, I use a computer and the internet, which is how I have researched and shared this essay.  No doubt the algorithms of Google, Amazon, Facebook, WordPress, Spotify, LinkedIn, YouTube and God knows what else have a pretty good record of my personal habits and tastes, accounting for the ads I see when I check my email or social media feeds; for all I know there are even actual human overseers monitoring my subversive opinions on Black Sabbath and pinup illustration.  As the author of printed articles and books I have of course already sacrificed a certain amount of privacy and anonymity, but just daily logging online has probably exposed more of myself than any published confessional ever could.

My lack of phone ownership is really less about staying off the grid than about not being on it every waking moment.  Having a phone would be like taking my PC with me while commuting, shopping, working, or strolling in the park – I’d idly scan the news, watch videos, or send messages when I’d supposedly, outwardly, be doing something else.  For me the deliberate process of sitting down at a desk and a keyboard marks the formal ritual of Being On the Computer, whereas when I am away from a terminal I can focus on my unmediated thoughts and actions without the constant distraction of possible weather updates, answers to trivia questions I’d otherwise forgotten, and recent images of somebody’s cooking.  I have considered the relatively modest prices of phone plans, the convenience of contacting family members and consulting transit schedules while out of my home, and the opportunities of photographing unforeseen encounters with Jimmy Page or the Sasquatch, but I remain unmoved.  I do, however, always carry some change when I leave the house, in case I need to use a pay phone.

Really, you only need to look around at the state of society to gauge the true cost of ubiquitous phone addiction. Countless institutions encourage us to “download the app,” “scan the code,” or “show your status” via phones, as if they are natural appendages rather than purchased products we’ve contracted to employ:  how many times have you scrolled through a density of legal text just to click “I agree”?  More, many people use their phone as carelessly as they operate their cars:  instead of first thinking about what they share (or that they are steering a heavy machine at high speeds), technology has become so indistinguishable from the self that we are all privy to millions of nude portraits and the half-thought musings of celebrities, and American presidents.  And to extend the automotive metaphor, the problem of “cancel culture” derives from phone-powered social media as inevitably as the problem of traffic jams is caused by the widespread ownership of private vehicles.  We have almost lost sight of the fact that Apple, Samsung, Google, Twitter, Facebook, Instagram and their ilk are commercial enterprises which profit from the attention we direct to and through them, even as they promote themselves, and are employed, as though they were indispensable public utilities or virtual public land.  They aren’t.  They are businesses whose continued output is the manufacture of their own markets.  Dissent from your version of The System all you like, but expressing dissent with your phone only reinforces a cornerstone of The System itself.

Imagine if digital phones had never been invented, or never caught on.  We might today be attending to the considered words of President Anthony Weiner, professionally edited and uploaded to his weekly blog.  Once, being seen naked or offering a mass of strangers your views on current events were special occasions whose imports were well appreciated beforehand.  Now they are just more things to do with our phones when we’re bored.  In contrast, my experiences, my beliefs, and my identity are too precious for me to communicate them indiscriminately through a little electronic gadget which has inexplicably become an extension of our bodily senses and our shallowest impulses.  I assure you, so too is the sight of my dick.

2 thoughts on “Why I Don’t Have a Phone”