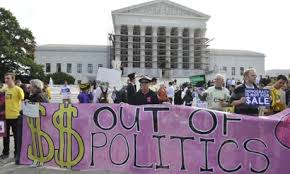 The recent decision by the US Supreme Court to increase the maximum allowable amount of money given by individuals to political campaigns has prompted much editorial weeping and gnashing of teeth.  Coupled with the earlier Citizens United case, in which it was ruled that corporations have the same rights as individuals in the matter of political donations, the Court’s verdict is widely seen as a surrender to rapacious capitalism.  “Democracy is not for sale,” protest the placards and the online posters, and there is a lot of talk about a looming plutocracy, about the U$A, about how Americans have “the best democracy money can buy,” about “government for the rich, by the rich, and of the rich,” and so on.

Not quite.  The fundamental principle of one person, one vote has not been overturned, and political bribery remains illegal; nobody can directly buy their way into public office or hand out cash at a polling station.  Essentially, the new rules let people and groups put more money than before into advertising their positions – and advertising, we know, isn’t always effective.  There are no limits to the resources commercial businesses can put toward hyping their new movies, cars, fast-food items, or household goods, yet many of those products still fail in the marketplace.  Similarly, rich citizens (on the left and right) can fork out huge amounts of their fortunes to promote a pet cause or an overarching ideology, but the promotion isn’t guaranteed to persuade everyone it’s supposed to.

Political corruption, certainly, is a real and serious issue.  But at the regional or national level, it’s pretty hard to get away with (think of indicted Illinois governor Rod Blagojevich, who got busted selling his gubernatorial influence to the highest bidder and refusing to help others who didn’t pay up).   Hardcore graft is most common in municipalities, like when you see ten guys take two months to repave a city block and it turns out they work for a firm owned by someone who just happens to be the alderman’s cousin.  That’s a subversion of democracy, all right, and a crime – as numerous local pols in Montreal and Quebec City have found out the hard way recently – but it’s hardly the work of a vast corporate oligarchy.

When you think about it, there’s a strange contradiction at the heart of the complaints about money and power.  On one hand, the premise is that the will of ordinary citizens ought to outweigh any greedy agenda of giant impersonal companies, but on the other, it’s taken for granted that ordinary citizens are a gullible herd which will inevitably fall in line with the greedy agenda of giant impersonal companies.  In other words, to enlighten the people, start by assuming their natural stupidity.  In other words, vox populi, vox Dei, unless the populi have been exposed to too many expensive campaign ads.   This patronizing view – that the electorate and their legislators can’t be trusted to form their own opinions and that money will always trump every other consideration – is as damaging to democracy, in its way, as any corporate lobbying.

The shrinking of the North American middle class, the tentacular sprawl of the financial industry, and the stratospheric rise of executive incomes are worrisome, and so is the vulnerability of the little guy in a globalized economy.  Yet the hysteria about “the rich taking over” sounds to me more like alarmist rhetoric rather than a meaningful criticism.  Keep in mind, too, that the franchise has significantly expanded in the last hundred years (women and minorities have a say that was once denied to them); that the wealthiest citizens aren’t all cigar-chomping steel magnates (Silicon Valley leaders and entertainment moguls tend to be politically liberal); and that the new technologies of crowd funding and social media mean average people can organize themselves as never before.  Democracy, for all its imperfections, is both resilient and adaptable.  If it’s true that we get the government we deserve, we ought not to give up on getting the government we want.