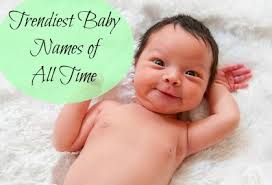 The parks are full of them.  I see them in the schoolyards, in the day cares, at the swimming pools and hockey rinks, playing in the play centres and active in the activity groups.  Teachers, tutors, supervisors, coaches, and parents like me know who they are – some of us may even be complicit in their creation.  They are called Jaden, Sierra, Dakota, Brooklin, Skyler, Tiana.  I have even known of the dreaded Ashlynn.  The horror, the horror.

As with fashion, pop music, and interior design, trends in the naming of children shift from year to year and decade to decade, and are among our most telling indices of times and styles.  Today grandparents Bill and Carol, Gordon and Barbara, Bob and Jean eagerly await their kids Jason and Kim, Scott and Jennifer, Mark and Heather as they bring babies Kiera, Cody, Haley, Kendra, Talyn and Kaden for a visit. Countless families now live across a nomenclative cross-section as rich in significance to a social historian as rock cuts might be to a paleontologist or tree rings to a forester.  As ever, celebrities set the precedents (hence a boom in infant Scarletts, Reeses, Rhiannas, and Beyonces), and a herd instinct gravitates toward the median.  In a world where politicians and marketers court Joe Sixpacks, average voters and ordinary folks, names are in a real sense the first moves we take towards – or away from – a lifetime of conformity, plainness, and acquiescence.

From my local police reports I’ve noticed that naming a child Jared, Dylan, Courtney, Brianna or Tyler twenty years ago is a good predictor of their eventual maturity into break and enters, drug dealing, or other petty crime:  the first of many mistakes parents made in their upbringing.  Before nourishing them with pop and processed food, before plopping them in front of the tube for hours on end, before violently splitting with the other parent, they gave their babies an appellation that became their biggest liability – what sounded like stardom in 1995 sounds like a welfare cheque in 2015.  The tendency to christen newborns with pseudo-unique titles like Kara or Racer or Sage or Riley, or phonetic fancies like Krystyn, Maddisyn, Lashawn, or Nikki, suggests to me a troubling decline in cultural (and literal) literacy, whereby children are increasingly seen as accessories or possessions upon which parents project their very limited ideals of coolness and sophistication.  The more original the conceit, the more Whitny, Keishayla, Kaydence, Colton, Trey and Track are likely to be consigned to realities of dull sameness.  Not everyone can be special, but being stuck from infancy with an imagined token of “specialness” pretty much precludes it.

I believe that there is a social equivalent of the so-called “thrifty gene”:  just as groups with a more recent biological imprint of famine or scarcity continue to store fat in an era of plenty, families with an experience of poverty or deprivation within the parents’ or grandparents’ memory will aspire to upward mobility even when securely lodged in consumerist contentment.  Thus, the anxiously materialist drive to acquire ATVs, SUVs, Ipods and flat-screen TVs is mirrored by the reflex to breed offspring with pretentious, would-be aristocratic names.  How many birth certificates have been filled out with Krystal, Morgan, Chase, Zachary and Jordan while visions of soap opera luxuries danced in the heads of the teenage fillers?  How many of those babies will ever fulfill the glamorous destinies their names imply?

Uncomfortably, names and naming are about class and status, and I know I betray a latent elitism in reacting as I do to the designations of some of my kids’ friends and classmates.  I know that the most important thing parents can give their children is love, and that little Susans and Richards may be neglected by their traditionalist moms and dads while Devins and Taylors receive nothing but affection and care from their cutting-edge folks.  Names are just labels, goes the counterculture dictum.  But the labels we stick on our sons and daughters say to the world who they are, where they come from, and what we have hoped for them from their beginnings.  It would be nice to see those hopes raised above the level of pop ephemera, the mundane mass, and the bland, banal middle of the road.  To bequeath to our heirs all the benefits we can give is to spare them the burden of keeping up with the Joneses from toddlerhood and entering Kindergarten among an anonymous horde of Caitlins, Shays, Carters, Paytons, Dakotas and Ashlynns.