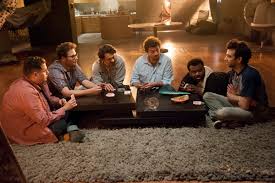 I note on Netflix that “Stoner Buddy Comedy” is now a discrete cinematic category, reflecting the successes of Knocked Up, Superbad, and Forgetting Sarah Marshall, in addition to popular fare like I Love You, Man, The 40-Year Old Virgin, Get Him to the Greek, The Pineapple Express, and 21 Jump Street.  It’s easy to see why these movies have become a genre unto themselves, with their recurring casts (Seth Rogen, Jonah Hill, Paul Rudd, Michael Cera, and others); their recurring use of crude or drug-inspired humor; and their recurring themes of male bonding and prolonged adolescence.  Many of them, I’ll be the first to admit, are pretty funny.  Yet after seeing 2013’s This Is the End, starring Rogen and Hill and various friends like James Franco, Jay Baruchel, and Mindy Kaling, all playing themselves, it’s plain that the stoner style has its artistic limitations.

This Is the End is about a gang of young Hollywood partiers trapped in one of the stars’ mansion when the Biblical Rapture occurs, and climaxes with an ascent to a cool Heaven where you can light joints with angelic halos.  So, spoiler alert, it’s a comic fantasy.  There are a lot of raunchy riffs on satyric demons, stained porn magazines, dropping Ecstasy, the vulnerability in a guy-dominated house of Apocalypse survivor Emma Watson (she makes a good-natured cameo), and a lot of people calling each other “man” and “bro.”  We see plenty of epic special effects and plenty more obvious improvisation among the performers; like the original and remade Ocean’s Eleven franchises, this is one of those pictures where the actors probably had more fun making the film than the viewers have watching it.

Frequent ad libs by movie actors do not necessarily denote bad movies.  Peter Sellers was a master of ex tempore performances, and his parts in Dr. Strangelove and the Pink Panther series were enlivened by his on-set inspirations.  Woody Allen, too, is known to encourage his players to improvise over the basic outlines of their characters’ situations within a given scene, and good filmmakers will always look for happy accidents or bursts of invention that make the story more compelling than anything afforded by precise adherence to the written script.  Yet with This Is the End and some of its predecessors, there is a sense of self-indulgence to the made-up dialogue and the action, as if the men on camera were trying to crack each other up or otherwise amuse themselves on the many dimes of a giant corporation like Sony Pictures – after the recent failure of The Interview, with Seth Rogen and James Franco, those dimes may now be a little less forthcoming.

For aspiring screenwriters, directors, and actors, there’s something grating about seeing happy potheads aimlessly goof around in a big-budget picture, when the discipline and craftsmanship that are supposedly prerequisites for show business careers are nowhere in sight.  I don’t doubt that Rogen, Hill, and their pals have talent, but with their track record it appears that they were given a degree of license on This Is the End which no unemployed thespian, recent film school grad or struggling scenarist (that’s me!) would be entrusted with.  That’s probably true of any commercial artist – if Steven Spielberg takes it in his head to make a four-hour movie about dentistry, a team of financiers and production coordinators will assemble around him in a few hours, whereas Joe Blow might spend years trying to raise the cash to realize the original thriller concept he’s been nursing since 1995.  Who said Hollywood was fair?

Orson Welles once remarked that having access to a movie studio was like playing with the biggest toy train set a boy ever had.  For those who play with the trains, it would be nice if they remember all the deserving kids who don’t get to enjoy the same treats, and, while they’re at it, to remember Orson Welles himself. But then, short-term memory probably isn’t a strength of the stoner buddy comedy cineastes.