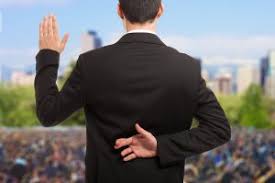 Christopher Hitchens once noted, “There’s a general tendency – not by any means confined to radicals but in some way specially associated with them – to believe that once the lowest motive…has been found, it must in some way be the real one.” This surely explains some of our preoccupation with “lies” in politics: there was US congressman Joe Wilson’s agitated “You lie!” heckle during Barack Obama’s 2009 State of the Union address; there was the late playwright Harold Pinter’s 2005 Nobel Prize acceptance speech condemning George Bush’s and Tony Blair’s “vast tapestry of lies” preceding the Iraq invasion; there was pundit Ann Coulter’s assertion, in 2003’s Treason: Liberal Treachery From the Cold War to the War on Terrorism, that “Everything you think you know about [US Senator Joe] McCarthy is a hegemonic lie”; there’s a library of hyperventilating books with titles like Abuse Your Illusions: The Disinformation Guide to Media Mirages and Establishment Lies; Lies the Government Told You; Myths, Lies, and Oil Wars; Pack of Lies (Volumes I and II): Deconstructing the 40 Most Destructive Conservative Myths in America; 48 Liberal Lies About America; and Red Hot Lies: How Global Warming Alarmists Use Threats, Fraud and Deception to Keep You Misinformed. And Google “Stephen Harper lies” to find a trove of irate blogs and web pages. It used to be that an accusation of lying was the ultimate weapon of political debate. Now it’s just an opening shot.

The real problem, though, isn’t that the arguments have gotten nastier. When we immediately dismiss contentious ideas as propaganda or intentional falsehoods, the scope of the public conversation shrinks down a little more and a little less practical good gets accomplished. Respectful adversaries may find common ground, but demonized enemies are unlikely to compromise with each other. For many commentators, calling their opponents “liars” is easier than making a point-by-point analysis of their position’s pros and cons; it’s also more gratifying to portray them as irredeemably corrupt rather than honorably mistaken. As Christopher Hitchens recognized, the charge of lying introduces a powerful moral urgency into otherwise endless back-and-forth disputes – why disagree when you can denounce?

Sure, politicians, businesspeople, and ordinary individuals can dissemble. But what are often scorned as lies are, more usually, plausible propositions which can be proved or disproved, depending on the persuasiveness of the evidence (and the skill of the persuader) one way or another. Religion is not a lie; patriotism is not a lie; man-made global warming is not a lie; Joe McCarthy’s historical reputation is not a lie; Barack Obama’s stated policies are not lies; neither are Stephen Harper’s. There could well be serious cases to make against all of those, but they don’t have to be exposed as massive hoaxes knowingly perpetrated by cynical elites for their own covert purposes. Sometimes, the greatest troubles derive not from somebody’s deliberate deceit, but from their telling the truth as they understand it. In 2006’s The Audacity of Hope, Barack Obama himself expressed a good-faith empathy with the leader most of his supporters had long concluded was criminally dishonest: “Democratic audiences are often surprised when I tell them I don’t consider George Bush a bad man, and that I assume he and members of his Administration are trying to do what they think is best for the country.”

As much as anything, the lie explanation offers the appeal of flattering the explainers as more sophisticated than the “sheeple” who believe everything they’re told – the exposure of the alleged untruth becomes less important than the self-congratulation of seeing through it. For this reason, even the mildest political or commercial rhetoric is sometimes exaggerated as fascistic manipulation that only brave iconoclasts can detect. Yet the ultimate implication of such caricatures, in a pluralistic society like ours, is disturbing. Most issues are at least arguable from several valid standpoints, so to write off all but one’s own as mere scams is to deny the legitimacy of any popular opinion you don’t share. Is that really how we want to categorize our fellow citizens, as either the duped masses or the clever few? As Andrew Potter put it in The Authenticity Hoax: How We Get Lost Finding Ourselves, “When the mere fact that someone supports the other side becomes evidence that they have been brainwashed, then the truth is you no longer believe in democracy.” The point is, finally, that freedom entitles us to have reasonable differences with each other, and it’s unreasonable to presume those with whom we differ have only fallen for a lie, or told one. And that’s the truth.