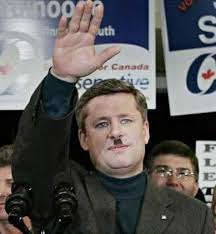 In November 1990 I happened to have been in London England, just as Margaret Thatcher was ousted as British Prime Minister, and I can attest that there was literal dancing in the streets at the news.  I also remember seeing, posted in London Underground stations, little stickers illustrated with a crude cartoon of Thatcher being hung.  “If you hate the Tories…” the stickers read, advertising upcoming conventions of like-minded haters.  It was my first, but not my last, exposure to the overt, ugly vitriol which now poisons democratic discourse everywhere.

I don’t care who they are, no public official in an open society should be demonized the way Prime Minister Stephen Harper was in the period leading up to the federal election of October 19.  It’s not that Harper was personable or engaging, or that he ran a particularly accountable government with a majority of Canadians’ support, or even that he deserved another mandate; he wasn’t and he didn’t.  Yet the elementary civics of representation, legislation, and Parliamentary procedure are too dry for most citizens to appreciate one way or another, so our political preferences have become an expression of our tastes, alongside our clothes, our music, the clippings we stick on our fridge and the memes we post on Facebook.  As the US academic Kevin Mattson put it in a 2004 Dissent essay, “Political values are like lifestyles today, and you seek out affirmation rather than criticism or questioning.”

Thus the worse Harper could be portrayed by his attackers – “muzzling,” “Nixonian,” even “fascist” and “racist” were common epithets – the better they could justify the instinctive dislike they already felt.  That feeling didn’t need to be backed up by historical perspective or close policy analysis; it was enough that he had bad hair and an awkward smile.  Stephen Harper did a lot to make himself vilified, certainly, but he was also a victim of the modern tendency to categorize the prominent and the powerful in either-or, messiah-or-monster terms.  In a calmer climate, he might have been seen as an unremarkable fiscal conservative, social moderate, and rather uninspiring political manager.  In our present hysteria, he was embellished into a theocratic tyrant.

Anger, distrust, and vehement partisanship are hardly new in politics. What is different today, though, is their predictably cyclical eruption any time a given politician becomes familiar enough to serve as a receptacle for them. Margaret Thatcher, George W. Bush, Barack Obama, Bill Clinton, Brian Mulroney, and even mere candidates like Sarah Palin, Donald Trump, and Hillary Clinton, have all been targets of intense hostility by standing in for their opponents’ worst fears and most alarmist pieties.  Their performance or their plans are less important than how neatly they reinforce a pre-existing stereotype, and how gratifying it is to denounce it.

If this is what it takes to ensure voter turnout (the recent numbers were the highest since 1993), I abstain.  Perhaps it’s the very facts of regular elections and free dissent which allow us to liven up these by now routine exercises of popular will by injecting them with rehearsed outrage and ritualized revolt.  The turnover of governments and the rejection of leaders are processes so entrenched in our culture that we make them exciting by pretending they are endangered. Too bad, though, that we need to invoke such dire fantasies merely in order to get ourselves to the polling station and cast a ballot.  Too bad we have to hate so deeply just to participate in something that really requires only an informed opinion.  Too bad we have to so excoriate hapless public servants like Stephen Harper just so we can flatter ourselves.