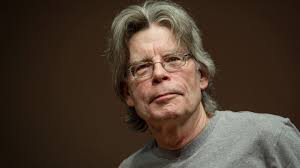 One day, someone will undertake a detailed analysis of the complete literary output of Stephen King.  That day lies far in the future, however, as King is still writing and publishing at age sixty-eight, and there is already a backlog of his work – novels, short stories, memoirs, reviews – awaiting thoughtful appraisal.  When such an assessment is made, it will probably echo the general opinion which many readers, myself included, express even today:  King’s best and most memorable work was created at the beginning of his career.

The more you read King, the more he seems to be recycling the same devices over and over:  the young family confronted by the supernatural (Pet Sematary, Firestarter); the happy couple torn apart by terror (“Sometimes They Come Back,” “Rainy Season”); the small community of disparate people caught in a crisis (The Tommyknockers, “The Langoliers”); the noble black victim (John Coffey in The Green Mile, Sarah Tidwell in Bag of Bones); the introspective writer battling demons external and internal (The Dark Half, “1408”); the vulnerable yet resourceful woman (Dolores Claiborne, Lisey’s Story); and especially the down-home secondary characters who speak in crudities and colloquialisms (all of the above).  King has never been as predictable as other bestselling novelists, but his styles and his techniques have become a genre unto themselves.  Long ago he notoriously admitted to producing “the literary equivalent of a Big Mac” in his books, and he has embraced this mass-produced quality more and more over the decades.

Some explanation for this is found in the sheer volume of King’s output.  Measured by word count, he is likely more prolific than the other all-time most popular writers, including Agatha Christie, Georges Simeon, Louis L’Amour, and even Charles Dickens – anyone who generates that much text is bound to repeat him- or herself occasionally.  The deeper reason may be the hell-bent-for-leather way King actually composes – “the way a miner might attack a cave-in,” he has said – which frequently leads him to include in his material quirky editorializing, stories-within-stories, inexplicable plot twists, and other digressions, as if he were merely exercising his imagination to see where it leads, rather than relating a preplanned sequence of beginning, middle, and end.  Many of King’s books are very long, and both critics and average fans have noted that some of them could benefit from major paring down by an editor uncowed by the author’s marketability.  Several, perhaps, shouldn’t have been published at all.  There are still some gems to be found in King’s post-1990 writing (I especially liked the meticulous revenge scenario of “Dolan’s Cadillac,” from 1993’s Nightmares and Dreamscapes), but they have been overwhelmed by his increasing turn to formula and verbosity.

Like his cinematic peer Steven Spielberg, born within a few months of him, King came of age in a media environment of pulp fiction, television series, comic books and B-movies, and again and again both the writer and the filmmaker have been drawn to these as fundamental inspirations:  folk archetypes for the electronic age.  King’s success with themes of ghosts, vampires, and monsters has been so influential that it can’t even be said that he brought horror to the middle of the road – instead he redirected the middle of the road to horror.  His genius has been to place the scary staples of the 1950s into a recognizable modern milieu of working stiffs, single moms, beer drinkers and TV viewers.  He created a literature for post-literate generations, and his accessible prose and regular-guy public persona encouraged thousands of ordinary, “un-writerly” people to take up his vocation, me included.  Stephen King’s is perhaps the most significant achievement in popular fiction of the last fifty years.  If his talents have been squandered for some time – and many in his audience would affirm it – I can only recall George Orwell’s verdict on H.G. Wells:  “But how much it is, after all, to have any talents to squander.”

7 thoughts on “Farewell to the King”