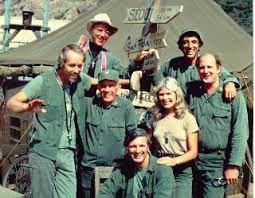 It puts things in perspective to consider that in living memory a popular American TV series frequently portrayed the US military establishment as silly or corrupt, and showed Army misfits as better people than their by-the-book comrades. The series, of course, was M*A*S*H, set during the Korean War but which ran on CBS from 1972 to 1983. Alan Aldaʼs Hawkeye Pierce became a national antihero for weekly challenging his superiors, along with condemning the brutality of war and denouncing the entire US endeavor in Asia. There was one episode where Hawkeye, at the operating table, sarcastically ticks off all the virtues of the American way of life being imported to the peninsula (heart disease, traffic jams, etc.); and in another where he uncovers the mistaken US shelling of a Korean village, which heʼs told will be rebuilt: “Now what about rebuilding the truth?” he asks righteously. That irreverence towards authority, nationalism, and patriotism was a staple theme of the program.

The liberal stance of M*A*S*H is worth remembering not because the show was always brilliant – indeed, its later seasons suffered from a pretty heavy-handed preachiness – but because it indicates that the pendulum does swing, if you wait long enough. For American conservatives, M*A*S*H was probably what Fox News is to progressives today, drawing in millions of viewers with a particularly blatant bias for an objectionable political sensibility. When M*A*S*H first hit the airwaves, Americans were tired of Vietnam, suspicious of their government, and shaking off old social standards; when it went off, Americans in significant numbers were once again embracing their military, respecting their leaders, and finding a new appreciation for the ideal of personal responsibility. By the end of its run the pacifist and feminist sensibilities of M*A*S*H were old news, with Ronald Reagan in the White House, a rekindled Cold War around the globe, and the “traditional family values“ of Jerry Falwellʼs Moral Majority gaining support.  Regular army had at last triumphed over the easy wisecracks of Alan Alda.

Now you can see the same thing happening in reverse. The neoconservative movement of the 1970s and 1980s was built by serious people coming up with considered critiques of liberalismʼs unintended consequences, while the orthodoxies of liberalism had themselves become routinely simplified for prime-time TV (with a laugh track, no less). Whether or not you agreed with neocons like Allan Bloom or Norman Podhoretz, you had to give them credit for fighting against received wisdom and the mass appeal of pop culture. Today itʼs conservative orthodoxies that are simplified by the likes of Glenn Beck, Ann Coulter, and Bill OʼReilly, and witness the received wisdom, if it can even be called that, of Donald Trump and Tea Party spokespeople like Ted Cruz. What seemed like an inexorably rising right-wing tide just ten years ago is crashing into the popularity of a two-term Democratic president and socialist presidential candidate Bernie Sanders, while voters have approved gay marriage and decriminalized marijuana in a number of states.   Hawkeye Pierce looks to have got the last laugh.  For now.

The point is not whether one brand of politics is right and another is wrong, or whether itʼs M*A*S*H or Donald Trump offering more sophisticated insights into the realities of American foreign policy. Instead the point is that nothing lasts forever, least of all popular opinion, electoral gains, cultural trends, or even hit TV programs. Itʼs tempting (and easy) to complain about conditions which right now seem to represent permanent and irrevocable changes to our society or our governance, but Iʼd suggest that if you really donʼt like the messages put out by the dominant media of your era, or if youʼre despairing of the intellectual direction your fellow citizens seem to be inclining, no worries – just wait thirty years or so.