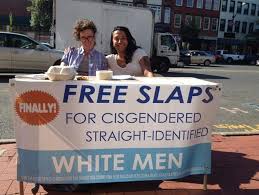 The Angry White Males have returned.  They are propelling Donald Trump and the Brexit; their voices call for border walls, trade barriers, and FHRITP; their battlegrounds range from online comment boards to public restrooms.  Yet if their nativism, populism, and downright chauvinism are familiar, their political standing is not what it once was.  Unlike their forebears of decades past, the Angry White Males of 2016 are not fighting to protect their privilege but protesting others’ presumption that they still have privileges to protect.

Between Black Lives Matter, Idle No More, and Caitlyn Jenner, heterosexual men of European descent are – in cultural terms, anyway – a beleaguered minority.  They are the one community that cannot invoke the historical discrimination routinely (and accurately) raised by women, gays and lesbians, and people of color.  While few suggest they’ve been denied an ample share of economic security, they are undoubtedly the Bad Guys of social justice, and have been for many years.  Ontario premier Kathleen Wynne’s formal apology for the province’s “generations of abuse” of Aboriginals and her plan to give same-sex couples the same parental rights as traditional partnerships are only the most recent instances where straight white males are told, at least implicitly, that they are both obsolete and guilty:  woefully outdated as identities and shamefully undeserving as citizens.   Yet this message, repeated across the political conversation, has complications for democracy.

One is that private self-definition is now a key determinant of public activism.  Labor and environmental movements, which presume a universal relevance (pollution and job markets affect everyone), now compete with far narrower campaigns in which small groups claim popular attention disproportionate to their numbers.  Transgender Natives? Put up a celebratory outdoor mural.  Queer municipal workers?  We need gay-friendly libraries. The legacy of suffering experienced by bisexual Afro-Caribbean wimmin?   A Truth and Reconciliation commission, now.   Feminism and the civil rights demands of the 1960s derived from the obvious prejudice directed at visible demographics; women and blacks were objectively denied full equality, whatever their individual responses to the fact.  Today, however, assertion of a hitherto unseen disposition invariably accompanies an appeal for acknowledgement before the law:  I am a [insert lifestyle, persuasion, or preference], and I want recognition.  It’s not just that the personal is the political, but that the personal alone is what dictates the political.  Any ideals of common interests and entitlements, held by the mainstream as much as the fringe, the numerically dominant as much as the numerically obscure, are thus eroded.

The reflexive denigration of straight white maleness points to a deeper problem.  One of the triumphs of our modern legal system is that power is no longer exclusive to a favored elite of WASPs:  no contemporary employer, landlord, merchant, or educator would cite his Caucasian superiority and expect to get away with it in court.  Yet we still blame systemic racism and homophobia whenever a gay or non-white person is offended by anything – the possibility of honest differences or legitimate debates on matters of race or sexuality is, all too often, discounted.  In the 2016 calculus of “tolerance,” anyone not claiming victimhood is thereby an oppressor.  Syrian refugees, residents of Attawapiskat, and Pride paraders have unmet needs, goes the reasoning, whereas ordinary white dudes merely have unearned advantages.  Just as cannabis advocates have noted that drug prohibitions make criminals out of law-abiding folk, so does the language of diversity and inclusion make bigots out of good people.

Angry white males, such as there are, may certainly be Bad Guys who resent ceding any of their long-held social comforts, but there are just as many who appreciate the wrongs of the past and who welcome new regimes of openness and accommodation.  Yet failing to distinguish these camps is partly why we are faced with bathroom wars, a Brexit, and Donald Trump.  To be continually scolded for harboring attitudes they have long outgrown, for enjoying prerogatives they have long relinquished, or for having a nature they have long stopped assuming is everybody else’s, is to provoke decent men into a reaction they don’t really want to feel.  I know I don’t.