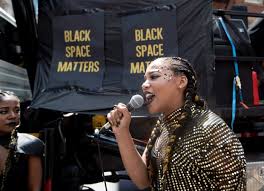 It was an moment illustrative of our times when this year’s Pride parade in Toronto was briefly halted by a demonstration of the local Black Lives Matter movement.  Essentially, two groups were competing for the championship of the Victim Playoffs, and all the public attention, cultural standing, and government payouts that go with it; the prospect, so far unrealized, of the Idle No More Native organization staging their own disruption of the BLM protest of the Pride celebration, and so on and so on, boggles the mind.

Of course, this is an easy jest for an outsider to make.  Certainly I’ve never known the kinds of discrimination and exclusion faced by either blacks or gays, all of whom surely have legitimate and overdue claims to popular sympathy and fair treatment.  Yet there is an element of farce in the claimants almost literally stepping over each other to have their respective says.  For generations, distinct social groups have demanded that the dominant or majority population grant them rights and recognition – now the dominant or majority population has itself become indistinct.  On one hand, straight black folks were free to fall in love, marry, and raise families when homosexuals weren’t, but on the other, white people who happened to be gay were afforded opportunities and privileges most people of color could never attain.  So what happens when those very real histories face off?  Who were the prejudiced, and who were subject to prejudice?  Whose suffering trumps whose?

These problems have become the logical consequence of our decades-long grievances over diversity and marginalization.  If citizenship becomes increasingly defined by identity – thus so-called “hyphenated Canadians” – then eventually some identities will consider themselves more identifiable than others.  At the same time, the precise makeup of the establishment or mainstream society becomes harder to gauge:  the argument that power belongs mostly to heterosexual middle-aged WASP males is no longer very persuasive. Still, we are so used to the rhetoric of social justice that we are stuck in its paradigms of stodgy, chauvinistic traditionalists denying stuff to a rainbow of ignored or impoverished progressives.

Really, though, everyone is in some way part of an invisible or isolated cohort. Francophone budgie breeders, disabled history profs, Mennonite pastry chefs, overweight albino model airplane buffs, and a thousand other categorizations, might reasonably block traffic with their own sit-ins or marches.  Left-handed Sikh gymnasts are people too, you know.  Tattooed and body-pierced Satanists have faced harassment and shame, just for being who they are.  In fact the simple equations of good guys and bad guys, vulnerable fringes and secure centers, noble victims and bigoted villains, has outlived its usefulness.

The clash of Black Lives and Gay Pride in Toronto on July 3 bears this out.  Until we stop slotting ourselves into narrower and narrower communities, through which to rail against the perceived repressions of an imagined “System,” we will continue to jostle in line for ever-more meaningless gestures of accommodation.  Unless we stop mimicking the stunts of 1968, we won’t be able to address the realities of 2016.  Until erstwhile minorities are willing to admit that they have already won many of their battles, politically and demographically, we can expect more of these silly, self-defeating episodes of competitive complaint.