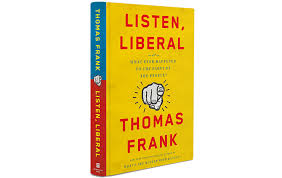 I enjoyed Thomas Frank’s writings when I first encountered them years ago – his The Conquest of Cool (1998) and Commodify Your Dissent (1997) were original and provocative cultural criticism that spoke to my generation in a way older publications didn’t.  He was as knowledgeable about rock music as he was of economics and history, and wasn’t fooled by the fashion-as-rebellion ethos so prevalent in post-60s society.  But Frank is now a mature commentator whose snide subversions no longer wear well.  They certainly don’t in his latest book, Listen, Liberal, or Whatever Happened to the Party of the People?

The basic argument of Listen, Liberal is reasonable, and after the 2016 Republican sweep of Congress and the White House it seems especially prescient.  The Democratic party, Frank says, has abandoned the US working class in pursuit of hipper and wealthier professional or “creative” types, allowing bankers and financiers to almost destroy the American economy at the expense of the wage-earning base that first coalesced around Franklin Roosevelt.  For this he puts much of the blame on the triangulating Bill Clinton (who openly adopted GOP policies) and the ineffectual Barack Obama (who insulated himself behind “well-graduated” Ivy League and Wall Street insiders).  Ordinary blue-collar folks just don’t have an organization that represents their interests anymore.

It sounds like strong stuff, but Thomas Frank is one of those political journalists – and there are many like him – to whom there are no honest disagreements but only dishonest people.  Thus anyone who doesn’t see things his way, including the Clinton couple, Treasury Secretary Tim Geithner, and New York Times columnist David Brooks, are merely cynical shills for American plutocracy.  In this Frank is the stylistic heir to Lewis Lapham, who preceded him as editor of Harper’s magazine:   both men take drooling delight at the image of the US as a decadent Rome, its hapless plebes kept satisfied with Wal-Mart bread and Spielberg circuses (why is it always Spielberg?), while the corrupt Neros of Manhattan, Washington, and Silicon Valley fiddle away. Neither Frank nor Lapham have time for fair hearings or constructive debate. To them, anything less than a reincarnated FDR administration illustrates America’s inexorable decay.

Listen, Liberal:  The ones who ingratiated the most were Democrats, who saw in the “creative class” strategy a way to revitalize struggling cities that were left behind when manufacturing departed for other climes.  The many, many bike paths that were built in hopes that professionals would show up and ride upon them?  By and large, those were built by Democrats.  All those art districts and street fairs?  Democrats….Sure, those vulgar Republicans could offer crass inducements like low taxes, but in the age of creativity it was supposed to be your town’s theatrical performances its carefully handmade cupcakes that truly opened the door to prosperity.

I Have Fun:  My first foray into the cesspool of Internet dating was a little reconnaissance on a Jewish dating site – I figured I owed Grandma at least that much for all the pills I swiped from her when I was a teenager…There are few things scarier than a thirty-nine-year-old single Jewish woman cruising a JDate mixer in four-hundred-dollar Manolo Blahniks that are slicing her feet into pastrami, except for maybe the forty-year-old male virgin sulking in the corner to a soundtrack of diluted hip-hop spun by a DJ wearing a tricolored Rasta yarmulke and in desperate need of a bath.  I fled that scene like Moses hauling ass out of Egypt.  But I am nothing if not compassionate, and it gave me the idea to use my connections at Screw and teach a class in how to haggle with a hooker with a minimum of hassle.

That’s the distinction between wit and sneer, between funny and cheap, between satire and sanctimony. Too bad Thomas Frank in Listen, Liberal still wants to sound like one but has come to embody the other.