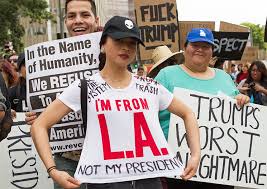 The silver lining to the presidency of Donald Trump, thin though it currently seems, may be that its broad opposition will now be forced to muster more powerful arguments on its behalf.  For many years, and certainly as Trump gathered support in 2016, liberals have defended the same political positions with the same boilerplate rhetoric, both of which failed to work on a crucial sector of the American electorate last time around.  Yes, Trump’s rival won the popular vote, but even if Hillary Clinton had taken the White House, there would remain a dismaying number of unswayed Tea Party, alt-right fake news believers working against her. Herewith some suggestions on how Democrats, progressives, and activists can best take on – and perhaps take down – the American populist surge and its outrageous figurehead.

First, ditch the celebrities.  Much of Donald Trump’s success is due to his media visibility and his Twitter spats with the likes of Meryl Streep and the cast of Saturday Night Live. Famous entertainers certainly have a right to speak their minds as citizens, but using show business personalities as spokespeople for dissent plays into Trump’s game, and reinforces the stereotype of Hollywood elites with whom ordinary folks can never identify. After all, the new president himself is a product of self-promotion, with no background in politics or serious public service – why should we trust others with the same lack of credentials?  The most convincing of Trump’s critics will come from the ranks of the humble, the vulnerable, and the plain.

A more difficult adjustment for the anti-Trump cause will be to rethink identity politics. When the President and his minions sneer at “political correctness,” they mean that reasonable disputes between different groups are too easily cast as a conflict between the ignorant and the enlightened, or between oppressors and their victims.  Right-wing populists don’t see it that way.  For them, racism ought to mean something more deliberate than just any act, statement, or condition someone finds objectionable, and institutionalized sexism alone cannot explain why there aren’t more female CEOs.  Given the historic American legal and cultural evolutions of the last fifty years, progressives who try to shame others into coming over to their side should now consider that tactic exhausted.  It’s one thing to say that not enough has changed since the days of Jim Crow or Mad Men, but it’s something else to say that nothing’s changed at all.  The injustices that motivated people in 1960 or 1975 have no obvious equivalents in 2017.

Beyond this must come a redefinition of what prejudice and discrimination really are.  In a profile of first-time voters run in the New Yorker magazine on October 31 last year, one Trump backer observed, “For the past decade or two [the word ‘racist’ has] been used by people on the left as a kill shot.  That just kills your argument, no matter what you’re trying to say. You’re a racist and therefore you’re evil and therefore you lose.  But I think people are noticing that it doesn’t work that way anymore.”  While Trump may have played to the resentments of straight white males, most of those probably don’t consider themselves homophobic, racist, or sexist; they aren’t all deplorable.  Too often, liberals have airily dismissed  any questioning of their social policies as mere bigotry, and thus weakened their ability to plead their cases solely on merit.  When “racism” is attributed to the people now running the Academy Awards as glibly as to the people who once ran Alabama, the term itself loses its moral force.  US conservatives will be better confronted over universal issues like the economy and the environment rather than the subjective grievances of any one community.  Trump offers enough affronts to basic protocols of governance, and to the rule of law, that ordinary partisanship only undermines the case against him.

There is much to fear and loathe in President Donald Trump, the government he leads, and the constituency behind him.  But only by developing a solid case against them all, rather than deploying an old arsenal of outspoken movie stars, open-ended complaint, and the scolding of the rights lobby, will they be defeated in the way they deserve to be.  Good night and good luck.