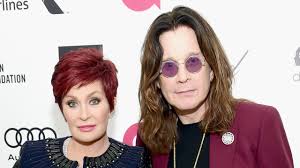 Ask a typical heavy metal fan who they consider to be their community’s most despised enemy and you may get a variety of responses.  Is it the evangelical Christian denouncing the music as the devil’s work?  The teenybopper boy band polluting the airwaves with their upbeat synthesized love ballads?  The snooty critic dismissing electric guitar boogie as juvenile trash?  Maybe – but the one topic average headbangers agree on is their shared contempt for Sharon Osbourne, wife of metal legend Ozzy, and one of the most recognizable non-performing players in what remains of the music industry.  Why?

Aside from rescuing her husband’s career since his drug-sodden dismissal from Black Sabbath in 1979, Sharon Osbourne has somehow become a star in her own right, appearing in the groundbreaking reality series The Osbournes from 2002 to 2005 and on The Talk from 2010 to 2021, as well as guesting on Donald Trump’s The Celebrity Apprentice and in numerous other television spots.  She has also exerted firm control over Ozzy’s media brand by vetting his concert itineraries, live and studio backing musicians, and recorded output:  whereas many comparable figures from his generation have wound up broke and forgotten, her shrewd oversight has kept him rich and famous for many years.  As the voice of several classic Sabbath albums and a run of solo hits including “Crazy Train,” “Mr. Crowley,” and “No More Tears,” whoever manages the professional affairs of Ozzy Osbourne – the vocalist, the household name, the corporation – is in charge of a uniquely valuable entertainment property.

What irks fans about Sharon Osbourne is the transparently manipulative way she has conducted that management.  Rock audiences have always cherished a conceit that their favorite music is a way of life and not just a commercial product – an illusion, certainly, but many artists at least had discretion enough to keep their commercialism low-key.  Sharon Osbourne, however, belongs to an earlier showbiz tradition (her father was the notoriously cutthroat English music impresario Don Arden), where publicity and profits are valued above all else.  Thus she has authorized the overdubbing of Ozzy’s 1980 rhythm section by compliant new musicians (to withhold from bassist Bob Daisley and drummer Lee Kerslake any income generated by continued sales of “Crazy Train”); blocked founding members Tony Iommi and Geezer Butler from gigging under the name “Black Sabbath” with any other singer; and pushed her aging husband into increasingly embarrassing concert appearances and crass mainstream fare like The Osbournes.  Heavy metal in particular has long been esteemed by its aficionados for its technical proficiency, creative autonomy, and us-against-the-world connection to its public, but at Sharon Osbourne’s direction it’s become merely another revenue stream.  As with the self-styled marketing mogul Gene Simmons of Kiss, whatever mystique, danger, or pop-cultural authenticity were associated with the original acts have been subsumed by an avalanche of contracts, litigation, and promotion.

It may be that such complaints are an inherently sexist reaction from heavy metal’s male-dominated base, to whom Sharon Osbourne symbolizes the ultimate authority of mothers and girlfriends so resented by millions of young men.  It’s also true that Sharon has given birth to three of Ozzy’s children over a long marriage, kept Ozzy from killing himself with alcohol and drugs (no small feat with someone whose signature tunes include “Sweet Leaf,” “Snowblind,” “Flying High Again,” and “Suicide Solution”), and even forgiven her husband’s blacked-out attempt on her life in 1989.  Insofar has Sharon has maintained the viability of Ozzy Osbourne and many of his fellow musicians in the ruthless business of rock ‘n’ roll, she deserves some credit.  But insofar as she has cheapened rock ‘n’ roll’s popular image and cynically exploited the loyalty of its most devoted listeners, she deserves a lot of blame.