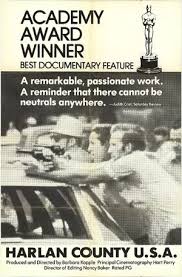 The proliferation of nonfiction films and television in recent decades – in the volume of programming on specialty channels, on DVDs, on Netflix, at cinemas, and on YouTube – has deeply changed our understanding of reportage, education, and advocacy.  Reality shows, political polemics, nature series, and behind-the-scenes “Special Editions” of commercial entertainments are so central to contemporary media environments that we risk forgetting the pure art of documentary filmmaking, and perhaps even the unmediated purity of undocumented existence.

In the days when cameras and sound recording equipment were unwieldy and tricky to operate on the fly, compelling documentaries of spontaneous events were special achievements.  The wartime tension of Memphis Belle (1944), the social insights of the Up collection (1964- ), the counterculture crisis of Gimme Shelter (1970), and the labor conflict of Harlan County, USA (1976), to name just four classics, captured situations that were happening with or without observers filming them – a bomber mission, a free rock concert – as lived by people who had no vested interest in their filmed portrayals – growing kids from various walks of British life, striking Kentucky coal miners and their families.  Luck and editing affected what was seen in the final movies, of course, but the unstaged, unpremeditated quality of the speech and action onscreen was obvious.  Hence the term documentary, as the cameras and microphones were genuinely documenting real occurrences, providing a bystander’s view of experiences which would have otherwise gone unrecorded.

That cinema verité ideal is obsolete now.  Partly this is because almost everyone carries a personal documentary production company in their pockets all the time, covering raw scenes from their daily dramas and then releasing them to the rest of the world on social media, so that the novelty of seeing “real life” represented at one remove has been long lost.  More significantly, though, the vast repositories of pre-existing film, photography, and video means the modern documentary producer can assemble hours’ worth of material from archival sources and link the clips up through whatever unifying narration or talking-head shots will spell out his or her premise.  Michael Moore or Ken Burns, for example, however different their themes or topics, don’t train their lenses on unfolding realities and wait to see the eventual outcomes; they start with a defined message, then gather relevant selections of images and dialogue to illustrate it.

Such techniques don’t necessarily invalidate the results.  Documentaries as varied as Moore’s Fahrenheit 9/11 and Burns’ recent Country Music, or other popular works like An Inconvenient Truth, It Might Get Loud, Supersize Me, and the extensive range of Netflix offerings on everything from Johnny Cash to the Church of Scientology, can be interesting and informative.  But, more than during the earlier era of factual films, they rely on audiences’ predisposition to their subjects – whether we already know the focus of the coverage, or agree with the likely editorial position – and they are also shaped by which individuals are willing to sit for on-camera interviews and which copyrighted TV or movie snippets (themselves often of rehearsed performances rather than live news) can be licensed to make any historic points.

So a Netflix product such as 2018’s Echo In the Canyon, say, features some illuminating original encounters with aging rock stars like Michelle Phillips and David Crosby, and vintage shots of Los Angeles in the 1960s, but it is closer to a promotional campaign for a certain style of music and its latter-day champions (Jakob Dylan and his generational peers cover the old songs in concert and studio sequences) than a fly-on-the-wall, you-are-there investigative report beholden only to unadulterated facts.  Similarly, documentary series on Bernie Madoff (The Monster of Wall Street) and online crime (Web of Make-Believe) have gigabytes of news footage, home video, closed-circuit and dash-cam TV, stored electronic media and staged re-enactments to compile into single episodes; another producer or editorial team could gather an alternative selection of data to say something entirely different about the same topic.  An old cinematic saw held that film is truth twenty-four times a second, but, just as few films are still made on reels of celluloid exposing two dozen images every moment, the methodology of modern documentaries prompts a rebuttal to that claim of authenticity.  Truth twenty-four times a second?   In every sense, not really.