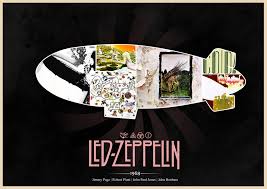 In light of the phenomenal response to the Celebration Day event of 2012, preceded by the DVD / How the West Was Won release of 2003 and the Box Set of 1990, here are some anticipated Led Zeppelin products we can look forward to as new media trends occur and new technologies become available.

2017: Jimmy Page puts out Official Bootleg, a multimedia package of soundboard recordings and videos from Led Zeppelin’s concerts of 1968-1980. Highlights include cleaned-up, digitally remastered versions of legendary shows in Japan, Germany, and Australia. A must-have for all Zep fans.

2021: To mark its 50th anniversary, an Extremely Special edition of the legendary Led Zeppelin IV is released.  Available online, special subscribers can access a 3-D tour of Headley Grange, the English country house where much of the album was recorded, and an immersive gaming experience where they can scale a mountain to meet a giant Hermit. Highlights include a video interview with seventy-three-year-old Robert Plant, explaining what “bustle in your hedgerow” really means. At $750 it’s a little steep, but still a must-have for all Zep fans, especially those not living in the flooded coastal regions of Oceania and North America.

2030: The Song Remains the Same is remastered in holovision. Now fans can actually walk on stage with Led Zeppelin at their 1973 Madison Square Garden performances and take a seat right in front of John Paul Jones’s bass amp. It’s like really, really, really being there. Deluxe editions come with synthesized cannabis smoke. You don’t really know Led Zeppelin until you’ve stood completely unnoticed between them while they played almost sixty years ago. Highlights include permanent hearing loss. An absolute must-have for all Zep fans all over the United States of the Planet.

2042:  The interminably-long-awaited 25th Anniversary update of Official Bootleg can now be accessed through the latest version of Google Brain©, just in time for Mandatory Consumption Month.  Be sure to delete any previous editions from your personal NetCloud™, partly because they’re no longer any good and partly on pain of legal prosecution.

2045: Amazing advances in biotech enable fans to purchase the Led Zeppelin DNA set, in which the genetic makeup of the four individual members can be replicated into living humans at home, where they will then be available play music, write songs, and just hang out. You don’t really know Led Zeppelin until you’ve cloned them in your basement. Highlights include a drinking contest with “John Bonham.” At 2 million YenEuroPesoDollars it’s a little steep, but still a must-have for the true Zep fan who has not yet been consumed in the recent Great Zombie Invasion.

2070: The Led Zeppelin Time Travel package is released to great fanfare around the world and the rapidly expanding Martian colony. Now you can use the latest teleportation equipment to physically journey back to any point in the band’s career, and maybe change their whole artistic evolution. You haven’t really experienced Led Zeppelin until you’ve personally affected their lives in real time. Highlights include convincing Jimmy Page to buy Joe Walsh’s old guitar.  No Zeppelin collection is complete without this one – in fact, one could go so far as to say it would be woefully deficient and an insult to the entire fan community.  BUY IT NOW!

2097: To mark its 75th anniversary, a remastered Celebration Day concert is projected onto the surface of the moon from the capital of the galaxy, Mars. You haven’t really experienced Led Zeppelin until you’ve seen them dominate the entire night sky and heard their music radiating downward from the deepest reaches of space. Highlights include an interplanetary cosmic union of all living things to the lighting effects on “For Your Life.”

2168:  What with the Mass Extinction following the unfortunate impact of Asteroid 78A5 with Old Earth a few years back, surviving homo sapiens may barter food or water for the 200th Anniversary Edition of the Led Zeppelin album, now available on wax cylinder.  Highlights include recorded sounds of music and singing, plus a faint ancestral memory of the once-lucrative popular music industry.