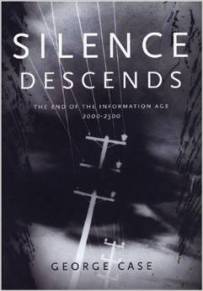 Written in 1995-96 and published by the independent Vancouver house of Arsenal Pulp Press in early 1997, Silence Descends was my first book and one of which I’m still proud.  It’s a brief exercise in “imaginary non-fiction,” constructed as a global history of the next five hundred years from the perspective of what is, to us, the distant future.  I was influenced by previous future histories The Third World War (John Hackett, 1979) and Brian Stableford and David Langford’s The Third Millennium (1985), but I’d also encountered Neil Postman’s Technopoly (1992) and Theodore Roszak’s The Cult of Information (1986, revised 1994) and even some of the media criticism of Clifford Stoll’s Silicon Snake Oil (1995) and the inevitable Noam Chomsky.  Hey, I was twenty-nine.

Silence Descends was intended as a corrective to what was then a huge wave of news and conjecture about computers and the newfangled invention of the World Wide Web; I wrote it in longhand and prepared a manuscript using a fancy electronic typewriter which had a little calculator-like screen to see the sentences I was keying in.  In those days Bill Gates and the prehumous Steve Jobs were regularly heralded as visionaries, while hip magazines like Details and British Columbia’s Geist ran thoughtful pieces on how America Online and Windows 95 were going to change everything.  At the time I was working in a Vancouver book store where we stocked a handy directory called something like The Internet Yellow Pages.  But what happens, I wondered, when all the hype finally dies down?  If we are at the beginning of a new era, how will we know when it’s over?   As I sit here updating my personal blog while consulting titles and dates on Amazon and Google, I think I can safely say that Silence Descends put that flash-in-the-pan “Information” fad in its place.

Yet as dated as my and others’ skepticism of cyber-hoopla soon became, over the years Silence Descends has drawn a smattering of appreciation from readers who perceive some of its subtler points.  Instantaneous access to unlimited data and entertainment has hardly solved all of our social or political problems; new technologies may create as many complications as they solve; the more humans integrate themselves with their tools, the more fundamental qualities of humanness we may have to find within ourselves.  Above all, my message that history unfolds very slowly – and yet is full of surprises – remains all too pertinent.  Just as no one in Biblical times could have foreseen the upheaval of the French Revolution, few in the days of the Drudge Report and CNN’s constant coverage of the O.J. Simpson trial might have imagined the advent of teleportation, or an organic merging of collective consciousnesses into a Community of Soul, let alone nuclear terrorism, massively disruptive continental power failures, and a Second American Civil War.  Except maybe me.

I’ve always been grateful to Arsenal Pulp (which continues as an active alternative press in BC) for taking a chance on a slim and unclassifiable project from a writer with only a few credits to his name, and to this day I’ve been pleased to discover the occasional positive mention of Silence Descends on the internet, despite my best efforts a popular diversion with youngsters and others for some time now.  While I hope the worst projections of my imagined future, like military and natural catastrophe, never come to pass, there remains satisfaction in my portrait of a far-off tomorrow where we can disconnect from our hardware yet still connect with each other.  And still read books.