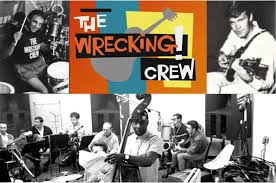 It was long a truism of rock history that the emergence of the Beatles and Bob Dylan brought a new maturity to the form.  Rather than the old model of groomed teen idols churning out formulaic doggerel for the adolescent masses, the second generation of rock ‘n’ rollers wrote, sang, and played their own songs of personal expression, imparting an artistic depth which audiences soon came to expect from pop music generally.

Lately, though, the hitherto anonymous craftsmen and women whose work was obscured by the Beatles-Dylan school have been getting some overdue recognition.  The films Twenty Feet From Stardom and Standing In the Shadows of Motown highlight the backup singers and session instrumentalists who performed on dozens of classic hits from the 1960s on, while Kent Hartman’s 2012 book The Wrecking Crew:  The Inside Story of Rock and Roll’s Best-Kept Secret documents the careers of the Los Angeles studio musicians whose playing augmented countless pop blockbusters.  You may not know their names, but you’ve certainly heard the music of drummer Hal Blaine, bassist Carol Kaye, guitarist Tommy Tedesco, songwriter Jimmy Webb, and numerous other behind-the-scenes pros.  If you’ve ever hummed along or tapped your feet to the Beach Boys, Simon and Garfunkel, Sonny and Cher’s “I Got You Babe,” Frank Sinatra’s “Strangers In the Night,” or the Captain and Tennille’s “Love Will Keep Us Together,” you’ve dug the Wrecking Crew.

While Hartman’s account aims to debunk the myth that pre-Beatles rock was the sound of a soulless commercial machine, however, it doesn’t completely succeed.  No one can say the likes of Blaine, Kaye, Tedesco, or producer Phil Spector and the then-unknown picker Glen Campbell weren’t talented; nor can anyone say that the calm before the British Invasion didn’t resonate with many two-minute American masterpieces.  Yet the Wrecking Crew (a loose collection of some twenty-odd California musicians – there was no formal band) frequently participated in a sham, lending their performances to “front” acts – the Monkees were an egregious example – who then got all the acclaim for material they were at best just partly involved in creating.  The revelation that popular entertainment was manufactured by in-house assembly lines of journeymen composers, lyricists, producers and players would have confirmed the worst suspicions of media critics like Theodore Adorno or Dwight Macdonald, who saw the entire cultural business as a vast factory supplying shallow diversions to stupefied consumers.

It’s also worth noting how so many of the “self-contained” ensembles, from the Beatles and the Rolling Stones, to behemoths like Pink Floyd and Led Zeppelin, hard rockers like AC/DC and ZZ Top, mellow monsters like the Eagles and Fleetwood Mac, and Jimi Hendrix with his Experience and Bruce Springsteen with his E Street Band, were punching far above their weight, hit-wise:  making as many famous songs as the Wrecking Crew or Motown’s Funk Brothers, but without having first contracted the songwriting, singing, and playing out to squads of specialists.  Gaggles of clock-punching professionals in LA, Detroit, New York and Nashville made many well-known tunes – but so did the five Stones and, say, Sly Stone’s septet or the four guys in Queen. The independence and originality of those groups are no myths, either.

Still, just to savor the genius in the US airwaves of the early 1960s, consider these three similar-sounding, gorgeous pop confections from the peak of the pop industry.  Notwithstanding any use of hired-gun writers, arrangers, producers, or musicians, they demonstrate that the final measure of true rock greatness isn’t in the back story, but the song.

Prepare for some chills and break out your hankies for 1964’s second-most popular harmonizing quartet:

And the one that inspired the previous, apparently obsessing Brian Wilson to distraction.  Exhilarating production by the tragic, troubled Mr. Spector: