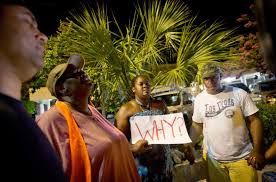 I’ll start off with a perfectly plausible scenario. A US homeowner hears a burglar snooping around his house in the middle of the night. He calls 911, the police arrive, and the suspect is apprehended. Turns out they’ve caught a serial offender. The guy goes to trial, is found guilty, and gets a sentence of let’s say ten years in light of his previous record. Dude does time in state prison. Question: because the entire process of investigation, arrest, conviction and incarceration is served by various branches of government (police, courts, jail), is the homeowner therefore a socialist?

Unfortunately, by the logic of pro-gun American conservatives, the answer is yes. Why didn’t he shoot the burglar with the firearm he’s constitutionally allowed to own and use? they’d ask. Even after the Charleston, South Carolina killings, the US right wing is trying to frame the debate on gun laws as one of liberty versus coercion, individual freedom versus state control. This is the level to which American conservatives have sunk.

I can hear the responses: “Mind your communist business.” “Shut your liberal trap.” “Don’t tread on me.” “These colors don’t run.” Whatever. The Tea Party right has become an enclave of knee-jerk xenophobia and patriotic orthodoxy that Dwight Eisenhower, Richard Nixon, and maybe even Ronald Reagan would hardly recognize as “conservative.” Conservative thinkers of the 1970s and 1980s who inspired the Republican revival were intellectuals like Norman Podhoretz and Allan Bloom – smart, articulate men who offered thoughtful criticisms of liberal policies and culture. Today their original ideas have become the rehearsed invective of Glenn Beck and Ann Coulter, which is in turn parroted by the NRA/NASCAR demographic. Twenty years ago, conservatives made constructive contributions to US political discourse. Not now.

Now the American right is dominated by people who believe all foreigners are jealous collectivists, blame the near-collapse of the US economy in 2008 on food-stamp scam artists, and who see legal restrictions on high-powered weaponry as infringements of their God-given liberties. Now the right is dominated by people blind to the erosion of their own middle class, deaf to the rise of China and India, and unaware of how their rage has been cynically stoked by the billionaire capitalists they so revere. They exhibit a disturbing combination of ignorance, paranoia, and blood-lust. Their frequent invocation of homosexual prison rape as a metaphor for US power (“Hey Canada, we’ll make you our bitch”) adds an even creepier dimension to their rhetoric. This is no longer a populist movement but a very loud and very degraded fringe.

Let it be said that the US left has marginalized itself too, in ways that mirror the deterioration of the right. After 9/11, some progressives insisted the disaster was both an inside job perpetrated by the Bush administration, and that America had it coming anyway; today conservatives claim that the federal government runs both a useless bureaucracy and a ruthless police state. The left used to say that George W. Bush was a secret Christian fascist who stole the elections of 2000 and 2004; today the right says that Barack Obama is a secret Muslim socialist who wasn’t born in the country. For both extremes, apocalyptic language and unhinged conspiracy theories have replaced reasoned, civil arguments.

Let it also be said that the US Constitution is one of the great documents of modern political philosophy, and that the US democratic tradition has for decades been an inspiration to the rest of the planet. The dynamic American economy was the engine of global prosperity through most of the Twentieth Century, and American armed might helped win two World Wars and the Cold War (one of the Tea Partiers’ many illusions, raised as they are on Call of Duty, is that America won singlehandedly). Americans can be proud of their history.

But outsiders like myself are troubled by the unrepentant demagoguery of today’s US right, and we are not “anti-American.” We admire much in American life and governance. We just hate to see how the murder of black faithful by a crazed white person has become an occasion for American conservatives to lecture us on their national greatness, on the inferiority of other countries, and on the virtues of turning the land of the free into a lockdown society where civilians are indistinguishable from soldiers. There is nothing to admire in a “freedom” that tolerates, even glorifies, the highest rate of armed violence in the developed world.

Happily, the last presidential election has demonstrated that the angry white males who embarrass US conservatism are a shrinking bloc of voters whose influence is in terminal decline. While they spout the stale slogans of Fox News and deride anyone to the left of Donald Trump as a radical Marxist terrorist appeaser, ordinary Americans are moving ahead with a better agenda for their country – one which doesn’t seriously maintain that the bullet-riddled bodies of nine churchgoers is a consequence of too few rather than too many guns in the United States of America.