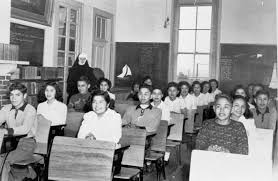 Recently some prominent Canadians, including Supreme Court Chief Justice Beverley McLachlin and Truth and Reconciliation Commissioner Justice Murray Sinclair, have used the expression “cultural genocide” to describe the system of residential schooling imposed on aboriginal Canadians over much of the Twentieth Century:  thousands of Indian children were taken from their homes and sent to live in institutions, where they were subject to harsh regimens of linguistic and religious indoctrination.  Many suffered physical and psychological abuse; some were sexually victimized by their white overseers.  But is it constructive for us to enshrine these facts?  The residential school system is the latest scab of Canadian history for native and non-native politicians, activists, journalists, social workers and lawyers to pick, and “cultural genocide” is the latest way for them to pick it.

Genocide is a word not well modified by metaphoric adjectives.  “Cultural genocide,” like “economic murder” or “emotional rape,” is the appropriation of a powerful term to characterize something significantly milder than what the term represents by itself:  a person who has been verbally castrated has not undergone the same experience as a person who’s been castrated.  Yes, Canadian aboriginals were certainly subject to a rigid program of Christian and Anglophone conditioning, intended to make them productive members of a modern Christian and Anglophone society.  However cruel and insensitive this might seem in retrospect, though – and whatever cruelties were perpetrated at the time – the residential school system was not a deliberate campaign of physical extermination.  We might as well say that feminists committed cultural genocide against male chauvinists, that scientists committed cultural genocide against religious faithful, or that punk rock was a cultural genocide of hippies.  In each case, an unforgiving imposition of new ideas made a way of life or belief obsolete, but there was no necessity of actually killing off the living believers.  “Cultural genocide” cheapens our understanding of the original Armenian, Jewish, Cambodian and Rwandan genocides by drawing a false comparison between ethnic heritage and biological existence.

Beyond the overstated phraseology around residential schools is, sadly but nonetheless inevitably, the sheer fact of compassion fatigue.  Canadians have been asked to consider the plight of the aboriginal population for generations now; indeed, residential schools themselves were once thought the best way to address the problem of native “backwardness” within a growing industrial nation.  Yet no official treaty, royal commission, task force, apology, reparation, special status or reconciliation has done much to alleviate the longstanding pathologies of poverty, addiction, corruption, incarceration and suicide which continue to plague aboriginal communities across the country.  So it’s hard to imagine that the current victimology of residential schools (former students are designated “survivors,” and they or their descendants are entitled to government payouts) will bring natives any closer to a dignified self-sufficiency, especially when new Canadians from Asia or Africa are already there, despite having themselves suffered decades of racial injustice.  How much more sympathy can the rest of us give? What more truth can we uncover, and what more reconciliation is obliged?  The real ongoing tragedy of Canada’s native peoples, I venture, has become their debilitating identification with ongoing tragedy.