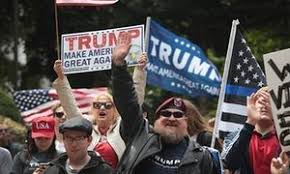 In a 2016 New Yorker article, “A View From the Fringe,” Thomas Mallon traced the history of far-right groups in the US, and noted how they have sometimes been perceived as indistinguishable from more moderate movements.  Political opponents, Mallon wrote, “might ask themselves if they sometimes aren’t guilty of erasing the boundaries they would have responsible conservatives ‘police’ by exhibiting a tendency to see and speak of conservatism as a single fairly despicable continuum.”  More than ever, such boundaries must now be recognized and policed by everyone.

Consider the fascist traditions drawn on by today’s alt-right.  Though their language and iconography have justly earned them the epithet of “neo-Nazi,” it’s important to understand the “neo” part.  Much of the world was mobilized against Nazi Germany between 1939 and 1945, but the Allies’ cause was expressed more as a defence of democracy and national autonomy than of anything we would recognize as minority rights.  America fought the racial supremacists of Hitler and Imperial Japan with a racially segregated military; 1940s Britain and Canada were hardly models of multicultural inclusion; low-level anti-Semitism was a common custom in western countries; and the main agent of German defeat, the USSR, was a totalitarian dictatorship only a little less brutal than Germany itself.  The deepest revulsion toward Nazi ideology was felt after World War II, when the full horror of the Final Solution became apparent, and civil rights leaders could shame US politicians with pointed comparisons between the unmet ideals of their country versus the realized ones of the vanquished Third Reich. Widespread revulsion toward Nazism is justified, but it’s also, to a certain extent, retroactive.  Fighting Nazis in 2017 is different, in practice and in principle, than fighting Nazis in 1943.

At the same time, the moral equivalence argument, lately summed up as “whataboutism” – the insistence that left-wing organizations and Black Lives Matter are as dangerous as the Ku Klux Klan and white militias – is not very convincing.  If nothing else, there is a cultural resonance to the sight of young, crew-cut torch- or gun-carrying white men that you don’t get with Rasta caps, Pride flags, and Take Back the Night marches.  Yet there is a little more plausibility to the complaint that members of the mainstream right have been driven further and further toward extremism because of the way they and their ideas have been caricatured by progressive critics.  Many current neo-Nazis were probably warped all along, but a few may have concluded they have nothing to lose, and a supportive community to gain, by living up to a reputation imposed on them from the outside.

Over the decades, politicians as varied as Richard Nixon, Ronald Reagan, George W. Bush, John McCain, Mitt Romney, and Canadian conservatives Preston Manning, Stockwell Day, and Stephen Harper, have all been charged with stoking racial resentment and playing to the worst instincts of white Christian tribalism.  Legitimate debates around free speech, immigration, and diversity have been written off as mere smokescreens for bigotry.  All western nations continue to present their citizens with conservative political parties (most of which have formed functioning governments at one time or another) and forums for right-of-centre opinion; the problem is that the parties and the forums have not been properly differentiated from the cruder versions beyond them.  Goaded by outrage outlets like Fox News and talk radio, some people who might have otherwise remained oddball libertarians or wonkish tax-cutters have seen themselves categorized as radicals and then embraced the role, in an ongoing cycle of vilification and polarization.   Yesterday’s Limbaugh-listening adolescent – uneducated, unemployed, and constantly reminded of supposed insults to his identity – has grown into today’s meme-sharing thug.  Liberals are not to blame for the far right’s violence and ugly rhetoric, but they could have done more to engage with the near right which, lately, seems so reasonable, so respectable, and so invisible.