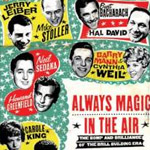 Standard accounts of the 1960s rock ‘n’ roll explosion have always concentrated on the artistic and social breakthroughs of the Beatles, Bob Dylan, the Rolling Stones, Jimi Hendrix, and a roster of other now-certified geniuses. But, as Ken Emerson’s 2005 book Always Magic In the Air:  The Bomp and Brilliance of the Brill Building Era tells us, what most average listeners were actually enjoying in the decade was the work of less celebrated craftsmen and women who created songs for others to deliver, but which have since become cultural staples no less familiar than “She Loves You,” “Blowin’ In the Wind,” “Gimme Shelter,” or “Purple Haze.”  Think of Little Eva’s “The Loco-Motion” and the Shirelles’ “Will You Love Me Tomorrow” (Gerry Goffin and Carole King), Elvis Presley’s “Little Sister” and “(Marie’s the Name) His Latest Flame” (Doc Pomus and Mort Shuman), the Animals’ “We Gotta Get Out of This Place” and the Righteous Brothers’ “You’ve Lost That Lovin’ Feeling” (Barry Mann and Cynthia Weil), Manfred Mann’s “Do Wah Diddy Diddy” (Jeff Barry and Ellie Greenwich), Jackie DeShannon’s “What the World Needs Now” (Hal David and Burt Bacharach), and the Monkees’ “I’m A Believer” (Neil Diamond).  Those too form the soundtrack of the British Invasion, the Summer of Love, and Flower Power.

Without striving to be a revisionist history, Always Magic In the Air thus prompts a reevaluation of pop music in the Twentieth Century’s second half.  Conventional criticism holds that the growth of “self-contained” acts (who wrote, sang, and played their own material) marked the form’s maturity as a vehicle for personal expression and political advocacy. But at any given point between 1957 and 1972, such artists likely comprised a minority of product on the charts or the airwaves.  Conversely, though the songwriters and song pluggers of Manhattan’s Brill Building and its environs have been dismissed as soulless hacks cynically churning out two-minute confections for manufactured idols, Emerson makes a case that the personal lives and musical evolutions of Goffin and King, Mann and Weil, et al, were as dramatic and as influential as anything in the superstars’ biographies.

Almost all of them Jewish New Yorkers raised as children or grandchildren of European immigrants (Mort Shuman, Neil Sedaka, and Neil Diamond went to the same high school), the Brill Building composers were particularly innovative in their equal appreciation for white, black, and Latin styles, and in being just young and hip enough to credibly voice the values of suburban American teenagers.  These were not Tin Pan Alley traditionalists. Their racial progressivism and technical sophistication allowed them to compress the elegance of Broadway, the grit of the blues and the spice of samba into a singular suite of tunes which today can fairly be considered masterpieces; even if the commercial imperative of the songs makes them discountable in theory, generations have treasured having them as part of the fabric of their everyday lives.

And yet.  Even Emerson concedes that the Brill Building talents were nudged towards obsolescence in the wake of Dylan and the Beatles:  “[S]ongwriters became hard-pressed to justify their profession unless they could add to it the prefix ‘singer.'”  It’s probably true that classic rockers like (say) Ray Davies or Neil Young didn’t have the perfectionist instincts and musical depth of David and Bacharach, or even Jerry Lieber and Mike Stoller – but they did bring a personal commitment to “Waterloo Sunset” or “Ohio” that audiences connected with; they weren’t simply passing their compositions down to the next stage of an assembly line. And it’s hard to deny the enduring popular appeal in the catalogues of Bob Dylan, Jagger-Richards, or Lennon-McCartney, who had the added virtue of going out to perform and record what they wrote instead of just hoping for the right interpreter to come along.  Still, Always Magic In the Air offers a valuable perspective on an era and an aesthetic which for a long time was viewed with narrower eyes and heard with duller ears.  As Barry Mann and Gerry Goffin wrote in Mann’s own evergreen hit from 1961, “Who Put the Bomp (in the Bomp, Bomp, Bomp),” “Who was that man?  I’d like to shake his hand.”