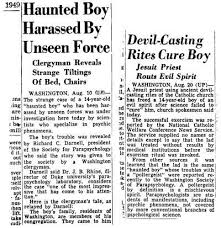 Most casual fans of The Exorcist know that William Peter Blatty’s sensational story of demonic possession was based on a real-life case he learned of in 1949.  Both Blatty’s 1971 novel and its 1973 film adaptation gave fictional accounts of an authentic performance of the Catholic ritual of exorcism, administered to a disturbed adolescent residing in the Washington DC area; in subsequent years numerous researchers have uncovered fresh details of the 1949 episode and compared them to the artistic liberties taken in the book and the movie.  But less well-known are the other factual sources drawn on by The Exorcist‘s author.

In 1974, with the huge popularity of William Friedkin’s cinematic version, Blatty wrote a tie-in publication, The Exorcist:  From Novel to Film, explaining how he had first developed his narrative and adapted it for the screen.  He quoted the 1949 Washington Post article which originally inspired him, and told of his efforts to track down the participants in the Washington exorcism.  But those early attempts initially yielded him little material on which to base his intended plot, and so he sought other documentary data, much of which was retained in his completed manuscript.  “A few of my findings were intriguing,” he wrote:  “the reporting of a common symptomology in cases widely separated with respect to both time and place; and cases where the victims were very young children.”

Of course, belief in possession and exorcism date back to ancient times, and several passages of the New Testament relate Jesus’ miraculous healing of possessed individuals, whose symptoms include uncontrollable strength and hyperactivity (Mark 5:3-4, Luke 4:33-35).  Blatty used some of these Gospel verses as epigrams for The Exorcist, and his character of Father Karras also reflected on the Seventeenth Century exorcisms conducted in a convent of allegedly possessed nuns in Loudun, France.  As well, the novel makes reference to the “Watseka Wonder,” the late 1800s case of an adolescent American girl from Watseka, Illinois, said to have exhibited multiple personalities, and to a German report from around the same time, wherein two young boys, Joseph and Thiebaut Burner, were subject to exorcism after uttering obscene speech and conversing in languages previously unknown to them.

The most intriguing possession story uncovered by Blatty, and the most recent prior to the 1949 affair, occurred in Earling, Iowa, in 1928.  Recounted in a pamphlet titled Begone, Satan!, it concerned the harrowing exorcism of a 40-year-old woman who made unearthly noises, reacted violently to holy sacraments, vomited copiously, and levitated above her bed – sound familiar?  The pamphlet chronicled delicately that disembodied voices had “tried their utmost to arouse thoughts of the most shameful type within [the victim], and tried to induce her to do things unmentionable.”  But, Blatty said of the Earling record, “I simply didn’t trust it.”  It was then he finally made contact with some of the principals of the 1949 Washington exorcism, and acquired a diary kept by one of the witnesses, the substance of which was to form the basic storyline of The Exorcist.  Yet his other findings were woven into his novel’s background to lend it a plausibility no previous horror tale, and few since, have ever attained.

Doubtless, all the historical testimonies of possession Blatty adapted for The Exorcist – including those from the Bible, Loudun, Watseka, Germany, Earling, and Washington in 1949 – can be explained as instances of hysteria, hallucination, repressed guilt, religious mania, and other mental illnesses, as well as mere exaggeration and hearsay.  It’s a testimony to the writer’s skill that such otherwise incredible assertions about supernatural phenomena were made to seem so true-to-life:  by having his fictional personages override the doubts of doctors and psychologists to accept that human bodies really could be invaded by malevolent spirits, he made his audience suspend their disbelief despite the inherent outlandishness of the premise.  Blatty’s achievement, perhaps, was less to convince us of demonic possession as a reality, but of its internal consistency as concept.  Aside from its gripping scenes and haunted meditations on faith, love, and cosmic evil, William Peter Blatty’s The Exorcist offers a valuable survey of a singular superstition which has troubled cultures around the world for centuries.