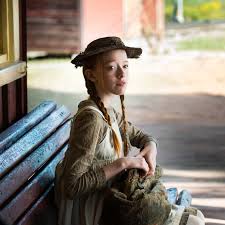 Recently it was announced that the Canadian TV series Anne With An E, an original show based on characters from L.M. Montgomery’s much-loved 1908 novel Anne of Green Gables, will introduce an LGBTQ plotline featuring one of Anne’s classmates.  In itself this anachronistic updating of an old classic is nothing new in show business – the 2015 Broadway musical Hamilton reimagined the American Revolution with people of color singing rap songs, director Baz Luhrmann put a hip-hop soundtrack in his 2013 version of The Great Gatsby, and 1962’s Cleopatra portrayed the Queen of the Nile speaking English and looking like Liz Taylor.  Yet Anne With An E‘s bid for contemporary relevance rings more false, and more heavy-handed, than most similar reboots.

It is, of course, distantly plausible that an adolescent boy in early 20th-Century Prince Edward Island would have felt and confessed stirrings of same-sex desire.  There have always been homosexual people, and the 1895 libel case of Oscar Wilde would have publicized the subculture to a wide audience. In the fictional world of Anne of Green Gables, a gay character is no more out of place than would be a blues guitarist, an opium addict, or a visit to PEI by occultist Aleister Crowley (now there’s a thought).  But the actual likelihood of such a dramatic turn must matter far less to Anne With An E‘s producers than its topicality, and its politics.

LGBTQ issues are front and center in the media of 2018, what with the attention given to transgender identities, gay celebrities, and the Canadian government’s recent formal apology to civil servants fired in past decades for their secret orientations.  Considering that non-straight individuals comprise only about ten percent of the national population, their causes take up a disproportionate share of the national dialogue.  In the ever-trendy calculus of the entertainment industry, of which Anne With An E occupies a small part, LGBTQ themes are very hot.  It’s no doubt also significant that the series is aired on the publicly owned and funded Canadian Broadcasting Corporation, long notorious in Canada for the transparently diverse / inclusive / progressive agendas of its programmers.  The end result is that the new season of Anne With An E belongs not in the category of period piece or family sitcom, but of social engineering.

What’s unfortunate here is that when creative license becomes an extension of public policy, the welfare of the actual public – including members of the LGBTQ community – is seldom enhanced.  Television viewers can spot contrived messages a mile away; everyone senses the difference between being told a story and being preached at.  At some point, we ought to admit that such “edgy” stunt episodes are no longer fostering gay pride, an idea which emerged from an era when homosexuality carried a moral stigma and criminal risk, but pushing gay glamour.  It’s not about justice or generosity anymore, but hipness. Certainly this latest ploy is one more occasion for showbiz players to mask self-interest with self-righteousness.  Certainly it’s the CBC’s familiar mix of piety and opportunism at work.  Certainly it’s the fashion Anne With An E is now exploiting, in its cynical, sanctimonious, and very un-Green Gables-like way.