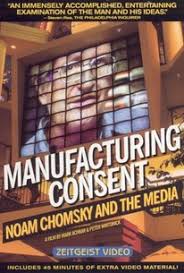 I blame Noam Chomsky for this mess.

Well, not really.  I’m sure the elderly Professor Chomsky is a decent person, and I recognize that his activism since the 1960s has been conducted in the service of peace, democracy, and social justice.  I also suspect he is among the millions of his countrymen appalled by Donald Trump and the rise of Fox News, “fake news,” and breitbart.com.  Yet it may be that the writer of Manufacturing Consent, Hegemony or Survival, Failed States, Deterring Democracy, and other titles helped create the social climate whereby ordinary audiences are connoisseurs of information and select only the reportage whose ideology they already subscribe to.  The mushrooming of “alternative” websites, Youtube channels, Facebook groups, and blogs that claim to reveal “what They don’t want you to know” – “They” being everyone from the Trilateral Commission to Greenpeace – are indirectly his doing.  I doubt Chomsky foresaw where his ideas would lead us in 2019.

It’s true that Noam Chomsky wasn’t the first thinker to detect inherent biases in mass entertainment and journalism.  Back in the 1950s, his political opposites were stoking fears of alleged Communist-Jewish influence in cinema, broadcasting, and publishing, and before that an arch-conservative fringe was fixated on how the studios of Hollywood’s Golden Age were run by men named Mayer, Selznick, Goldwyn, and Zanuck. Chomsky’s innovation was to see bias from the other side, that of the US foreign policy establishment, the US military, and its corporate contractors.  His background as an academic also imparted a scholarly rigor to his arguments that the anti-Semites and anti-Communists never had.  He made an attractive case.

So attractive, in fact, that many who didn’t share Chomsky’s philosophy or check his research did absorb his basic message – his conspiracy theory, really – that news is controlled by powerful people with an overarching agenda, in order for them to shape popular will.  These listeners then proceeded to invert the Manufacturing Consent premise by turning it on the same outlets Chomsky analyzed, but from a right-wing perspective.  So whereas Chomsky’s writings condemn the New York Times, for example, as a mouthpiece of the military-industrial complex, his evil twins like Sean Hannity and Sarah Sanders see the paper as an organ of liberal elitist propaganda.  In a 2009 New Yorker profile of talk-radio firebrand Michael Savage, Kelefa Sanneh noted the impact of the heavyweight Rush Limbaugh on Savage’s medium: “His sustained critique helped erode the traditional authority of network news and big newspapers, and also helped undermine the concept of disinterested journalism.  There was something postmodern about [Limbaugh’s] insistence that journalists were just another interest group, and that ‘the news’ had its own ideology.” Something postmodern, perhaps, but certainly something Chomsky-ite.

Thus the constant attacks on “the mainstream media” by Donald Trump and his supporters inadvertently echo similar complaints long voiced by the Trumpsters’ mortal enemies. Fifteen or twenty years ago, there was just as much talk about Orwellian deceptions and duped masses, but the talk was mostly among progressives – the same rebels who now defend traditional news platforms as bulwarks of democracy.  The great irony here, of course, is that today were are all equally fearful of the manufactured consent Noam Chomsky decried, just when we have an unprecedentedly open forum in which to defy it. Chomsky’s prominence as a leftist intellectual may eventually be overshadowed by his unintentional career as a media theorist:  he rose to public renown denouncing the limited channels of fact and opinion available to the average citizen, during the same period that cable TV, home video and soon the Internet were transforming society, and average citizens were being deluged with more fact and opinion than they could constructively process.  By now it’s dissent that’s mass-produced, and broad public trust in government, the press, or any kind of authority, is the distant ideal.  Chomsky’s dire warnings about the dangers of slanted reporting and secret string-pullers were convincing, except they convinced many people besides the anarcho-socialists he meant to motivate.   Thanks a lot, Noam – enjoy Fox News and Sarah Sanders.