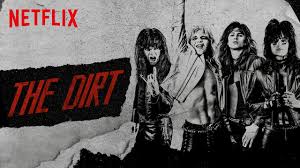 It’s somehow fitting that the 2019 Mötley Crüe biopic, The Dirt, has been released on Netflix rather than the big screen.  Propelled to fame by the cable network of MTV, and maintaining notoriety over the years through contrived reality shows and “accidentally” released sex tapes, the Crüe were always a TV band.  As a story, The Dirt is the account Mötley Crüe’s members have sanctioned and Mötley Crüe fans expect.  As a commemoration and as a product, The Dirt is about what Mötley Crüe deserves.

Though the Crüe have long been celebrated for sex-and-drug debaucheries, there’s the asterisk that theirs took place in the 1980s and 90s, when lifestyle excess had become the trademark of pro athletes, sitcom actors, and Wall Street traders, not just rock stars.  The orgies and ODs The Dirt depicts were really no more decadent than those of Jim Morrison or Jimi Hendrix in 1969, or the Rolling Stones and Led Zeppelin on tour in 1972 – and Morrison, Hendrix, the Stones and Zeppelin were operating in a culture much less receptive to hard-partying long-haired pop musicians.  In other words, the sordid escapades of the earlier acts (not to mention of the Who, the Grateful Dead, Aerosmith, and plenty of their peers) had a socio-political edge which, when replicated by Nikki, Vince, Tommy and Mick, had been reduced to mere celebrity indulgence.  Even the many women used and abused by Mötley Crüe appear in The Dirt as showbiz opportunists complicit in their own exploitation, like starlets and strippers, rather than creative muses (let’s face it, Heather Locklear was no Anita Pallenberg or Angela Bowie, let alone a Yoko Ono).  The Crüe experienced their share of trauma and death, but there was never much danger to their music.

The other point The Dirt misses is that Mötley Crüe really weren’t very good.  I have written in an earlier blog post about how Hollywood glam acts of their ilk, formed and signed to record labels in the epicentre of the world entertainment business, just didn’t seem to have worked their way to the top like (say) Australia’s AC/DC or Birmingham England’s Black Sabbath had to.  Even next to their Californian contemporaries, Mötley Crüe lacked the musicianship of Van Halen, the heaviness of Metallica, or the provocation of Guns n’ Roses.  At each stage in their history, they seemed to be chasing trends others had established before them:  Satanic motifs (Shout At the Devil), androgyny (makeup and hair gel), power ballads (“Home Sweet Home”), sexy babes as backdrops (Girls Girls Girls, “Looks That Kill”), the Scarface-inspired video for “Dr. Feelgood,” the Zeppelinesque riff of “Kickstart My Heart,” and even the umlauts in their name, in conscious or unconscious imitation of Motörhead and Blue Öyster Cult.

I like the Crüe’s “Live Wire” and a few other tunes, but I share in the critical consensus that classifies them as pop metal, and though they seemed to have earned a reputation as decent live performers, their records always sound too produced to boast the spontaneous, jammy ambience of the truly great rock ‘n’ roll ensembles.  The tale of their rise and fall and rise merits a Netflix production, but then, so do stand-up comedians, nature documentaries, and home renovation.  By now, the basic plot of The Dirt has already played out in earlier movies, and the derivative career of Mötley Crüe has already been more compellingly lived by better artists.

4 thoughts on “Theatre of Same”