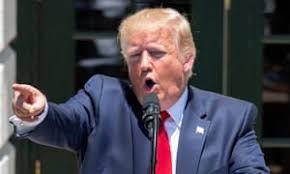 One wonders what historians of the future, if we have any, will make of the current fixation on alleged and denied racism.  Donald Trump is of course the latest public figure who does or doesn’t merit the charge, but even after his much-anticipated departure the precise definition of the word itself will still be debated.  Which sides are taken in those debates will reflect broader divisions over politics, morality, and language.

It’s instructive, first of all, how all parties agree that racism is a negative term.  No one wants to be described as a racist; the US president himself says he does not have a racist bone in his body.  Celebrities caught saying or tweeting something construed as racist invariably offer tearful apologies.  Perhaps it is a small sign of progress that racism has become like stupidity or infidelity – there may still be a lot of it around, but there aren’t many people willing to own up to it.

Yet the universality of “racism” as a pejorative means it can get invoked as a general adjective rather than a specific description.  There’s a parallel issue in recent uses of the word genocide to characterize the suffering of Missing and Murdered Indigenous Women and Girls (MMIWG) within Canadian society, as in the findings of the eponymous official inquiry:  we all know “genocide” means something very bad, so applying it to any very bad historic episode seems justified.  Why not also call the Spanish Inquisition, the African slave trade, or Mao’s Great Leap Forward genocides, in order to convey the enormity of their horror?  But to do so distorts the narrow criteria under which the term was originally ascribed.  Genocides are human catastrophes, but not all human catastrophes are genocides.

Similarly, the contemporary understanding of racism is as a synonym for “offensiveness” or “insensitivity,” with rough equivalents ranging from “ignorance” to “hatred.”  In each case the definition is set by subjective observers rather than the putative racists themselves (likewise, progressive politicians can get tagged “communist” or “socialist” by opponents who want to discredit them).  In the past, however, racism was active, deliberate, or reflexive antipathy to anyone of a different ethnicity, encompassing verbal slurs, physical harassment, and official discrimination.  It signified open hostility, usually from a position of power or advantage, aimed a priori at entire populations.  Eventually, racism replaced bigotry or prejudice as an extreme indictment.

By those standards, many people were racists a generation or two ago:  white leaders who withheld the rights of citizenship from minorities; white artists or writers who depicted non-whites in demeaning ways; white children who told cruel jokes about, or white adults who played cruel pranks on, their non-white neighbors.  But when you take away the withheld rights, the demeaning depictions, and the cruelty – take away the derogatory slang and the casual stereotypes and the legal authority – is what’s left still racism?   Racism was once marked by segregation, apartheid, and burning crosses.  Its parameters are less obvious today.  At the very least, the racism of 1950s Alabama is surely not the same as the racism of a 2019 Facebook post.

It may be that “racism,” like “sexy,” or “cutting-edge,” or “ironic,” is simply too familiar a cliché to have much clear connotation anymore.  Or perhaps the people most commonly accused of being racists are now just living up to a label they know they’re going to be stuck with anyway.  But the questions around defining the word – and of maintaining its moral sting – will be here for a while yet.  Can a member of one group criticize someone of another and still have his or her underlying good will assumed?  Are there ever legitimate measures by which distinct cultures can be compared, and how can we constructively articulate them?  Is tribal loyalty inherently irrational and reactionary, or does it depend on the tribe?  Are there lines of political argument too embarrassing to advance?  Can a person be ignorant, insensitive, offensive, and hateful but not quite racist?  Does civic equality guarantee rhetorical immunity?  Should it?  Among hundreds of millions of people expressing identities and opinions as never before, who of us has final approval on the limits of expression?

You tell me, Mr. Future Historian.

You tell me, Mr. Zuckerberg.

You tell me, Mr. President.