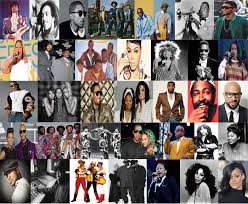 As awards shows become increasingly central to show business itself, they have also become the focus of our current fetish for diversity. The Oscars, the Tonys, the Emmys, and other spectacles, are routinely scrutinized for insufficient “representation” among nominees and winners, just as individual movies, plays, and TV series are now lauded or panned for the racial and gender makeup of their casts, as much as for any traditional creative achievements.  Yet the music business has largely been spared these new standards. Can you guess why?

It’s true that the FM format of Album Oriented Radio was sometimes slammed as “Apartheid Oriented Radio,” and that Kanye West hijacked Taylor Swift’s acceptance speech at the 2009 MTV Music Video Awards, claiming “Beyonce had one of the best videos of all time” (why am I aware of this?), but for the most part, contemporary pop is not a place where people of color are unheard or overlooked.  Indeed, since the rise of jazz and blues one hundred years ago, through swing, rock ‘n’ roll, funk, soul, rap, electronica and even heavy metal, the mediums’ roots in African-American styles have been unmistakable.  Just think of some of the biggest names across the decades: Armstrong, Ellington, Davis, Holiday, Parker; Muddy Waters, B.B. King, Chuck Berry, Little Richard, James Brown, Jimi Hendrix; Aretha Franklin, Diana Ross, Tina Turner; Bob Marley, Michael Jackson, Prince, Run-DMC, NWA – where to stop?  And that’s to say nothing of the white acts who emulated and imitated them.  You can quibble over who should have been given which recognition, who should have sold more records, or who should have signed better contracts, but no one can say black artists have not exerted an enormous influence on the global music industry, and thus global culture as a whole, since the early Twentieth Century.

Even in the rarified sounds of opera and classical, it’s not hard to find non-white figures of significance:  Paul Robeson, Leontyne Price, Jessye Norman, Yo-yo Ma, Lang Lang, and numerous others.  Nor have gay musicians been marginalized, with everyone from Leonard Bernstein, Stephen Sondheim, Samuel Barber, and John Cage to Elton John, Freddie Mercury, Dusty Springfield and Melissa Etheridge earning major critical acclaim and commercial success over the years.  Drop in at a record store, or check out this week’s Billboard charts, or sign in to Spotify, or pull out a random selection from your own CD collection, and you’ll likely get an impeccable example of social diversity.  More than most other enterprises, popular music has reflected the composition of the society from which it derives.

For some reason, however, charges of racism and homophobia have lately migrated from serious fields of politics and economics to relatively trivial spheres of entertainment.  Which is pretty ironic, given that the same entertainment has often been condemned by actual racists and homophobes (in Robert Harris’ novel Fatherland, set in a counterfactual 1964 where Nazi Germany still dominates Europe, German officials denounce the “pernicious, Negroid wailing” of a young English group drawing big crowds in Hamburg).  It may be that, as actual barriers of law come down, we turn to protest whatever ones remain in the abstract – although many people would say there are still plenty of tangible obstacles to diversity in everyday society, let alone on Broadway or at the Academy Awards.  Or perhaps the media is now truly more real to us than mere physical community, such that we are far more sensitive to supposed bigotry on a screen or a stage than on the street; after all, when shallow celebrities can run national governments, it’s only natural that problems which would normally occupy national governments should be defined by shallow celebrities.  I’m not sure if that’s an advance or a regression.  Meanwhile, to find a realm where a rainbow of humanity has long been existing together in generous harmony, just crank some tunes.

One thought on “Various Artists”