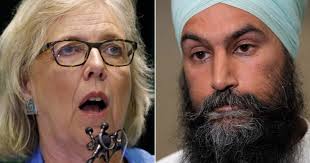 It seems an odd way to court voters by telling them that they are bad people, but that was what Green Party leader Elizabeth May did during the recent Canadian election:  “You can’t deny that our society is awash in systemic racism,” she said  (she has since announced that she is stepping down).  Not to be outdone, the New Democratic Party’s Jagmeet Singh, asked if Canada was a racist country, confirmed “There’s no question about it.”  As the edifice of openly discriminatory laws and policies is removed, we are left with no obvious obstacles to opportunity for all citizens.  But concepts like intersectionality, privilege, cultural appropriation, and the systemic racism apprehended by May and Singh, enable a new generation of activists – and a new, self-interested economy of social workers and politicians – to carry on the cause, and carry on enjoying the moral distinction it confers.

Clearly, the bar for what constitutes racial and other hatreds has been lowered in recent years.  Extremes of real or threatened violence, in the form of burning crosses or skinhead gangs, are no longer required to see harmful prejudice – a contentious social media post, published essay, or public lecture can be enough.  Somehow, even the abstract clash of ideas, never mind of physical humans, is too dangerous for some of us to countenance.  But think of it this way:  the battle against drunk driving is won when there are no impaired motorists on the road.  The battle is not extended so that no licensed driver can ever consume alcohol, or so that AC/DC’s “Have a Drink On Me” is blocked from car radios, or so that anyone not a member of Mothers Against Drunk Driving is sent for rehabilitation.  Something similar has happened opposing the serious problem of bigotry.

Those of us who have raised concerns about this sort of zealotry do not fear a perfect inversion of past injustices.  We don’t predict that white people will soon have to sit at the backs of buses, or that female construction workers will make catcalls at young men who walk by building sites.  Instead we worry that prejudices once casually applied to some groups now have equivalents just as casually applied to others, e.g. blacks are inferior, women are sex objects, gays are perverts, whites are racists, men are potential rapists, straights are prudes, etc.  Each of those is a demeaning stereotype, but only the older ones have passed out of common currency and civilized conversation.  The very broad brushes of historic or institutional discrimination wielded by progressive commentators also permit sweeping denunciations that don’t need to name names:  since the guilt is perceived so widely, the standard of proof we expect in an individual case can be ignored.  Call one person a racist, a sexist, or homophobic and you’ve got a lawsuit, but call an entire society racist, sexist, or homophobic and you’ve got a campaign platform.

Unfortunately, we may arrive at a two-can-play-that-game point where intolerance itself becomes a tradition to be defended – where the same outlooks characterized as hateful are deemed special qualities of a vulnerable community exempt from censure.  For some time, of course, the principles of certain religious minorities have clashed with the mandated inclusion of secular laws, even though secular laws explicitly protect the principles of religious minorities.  What happens when other groups invoke their antipathy to outside cultures, or their sexual harassment or their ugly jokes, as inherent values deserving of protection?  How much real difference are we prepared to accommodate?

In the end, spending as much energy as we do on policing the parameters of what is and what isn’t objectionable, according to who is and who isn’t allowed to be objectionable, leaves us precious little time to address anything else.  Not only can you not shame people into supporting your cause (attention, Elizabeth May and Jagmeet Singh), but if there are problems to be solved, we should have a clear picture of their eventual solution.  The worthy project of eliminating racism and other social ills is too important not to have an agreed-on end point.  We will not end intolerance by constructing ever more convoluted ways of defining it.