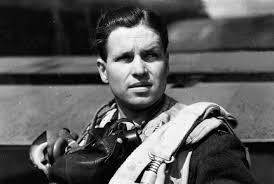 Warning:  This essay refers to a notorious racial epithet.

The other day I was watching the classic 1955 war movie The Dam Busters for the umpteenth time, and I was surprised to note the edition aired for television retained the original’s dialogue.  Based on the true story of the legendary “bouncing bomb” attacks by a Royal Air Force squadron against German dams in 1943, the main character, Wing Commander Guy Gibson (played by Richard Todd), owns a black Labrador Retriever called “Nigger.”  The name is heard several times in the film, both in reference to the dog and as a code word in the mission.  In the cinematic version of The Dam Busters released to US theatres, the term was overdubbed by “Digger,” but evidently the latest TV cut is faithful to the uncensored, insensitive truth.

Indeed, the real Guy Gibson did have a pet he named with an ugly slur:  a military operation against the world’s worst white supremacists was thus undertaken using the language of white supremacy.  Gibson and his RAF comrades may have had the faint excuse that the offensive tag was more abstract in the relatively homogeneous Britain of the 1940s than in the US, where it was commonly directed at real people (the horror writer H.P. Lovecraft had a black cat he labelled “Nigger-Man”), yet Gibson’s use of an infamous anti-black insult was hardly innocent, and many in his generation casually invoked titles like “Sambo” or “Sooty” for non-white or even dark-complexioned individuals.  After the Dam Busters raid made him a national hero, the pilot was encouraged to stand as a candidate for the Conservative party, and his biographer Richard Morris has appraised, “Today we might characterize [Gibson’s opinions] as being well to the right…in some respects extreme or intolerant.”

Of course, Guy Gibson is hardly alone in his status as a once-venerated, now-discredited figure from history.  As seen in recent controversies around statues and building designations, many people for whom we were once taught reverence are seen as unforgivably backward now.  Canada’s first prime minister, John A. MacDonald, played a key role in establishing the culture-destroying Native residential school system, under which thousands of Aboriginals suffered.  Pioneering Canadian feminist Nellie McClung favoured eugenics, the supposed “science” of social improvement that culminated in forced sterilizations and, ultimately, the Holocaust.  Writer George Orwell, in his books and in private, uttered harsh stereotypes of Jews and homosexuals.  The list goes on, and gets longer all the time.

Yet there is surely something priggish and pedantic in picking apart long-gone targets as insufficiently enlightened for 2019, rather than for 1867 or 1949.  We admire MacDonald, McClung, and Orwell not because of how they measure up to the morals of the present, but because of what they contributed to the greater good, and against the far greater evils, of their own times.  John A. MacDonald had prejudiced opinions of Native North Americans, but he was farsighted enough to see the potential of an independent nation in the northern half of the continent; Canada has been a prosperous democracy for over 150  years.  Nellie McClung subscribed to debunked ideas about human hierarchy, but she fought to elevate women from their low status; females’ personal and legal freedoms are enshrined in our customs and our laws.  George Orwell said crude things about minorities, but he alerted millions of readers to the horrors of totalitarianism and surveillance; his novels are perennial indictments against all forms of tyranny.

Compared to ours, everyone’s views from a long time ago will seem ignorant, including the victims of ignorance themselves:  the populations denigrated by Orwell probably thought smoking was harmless, the women championed by McClung likely included religious and racial bigots, and the Natives subjugated by MacDonald could well have sanctioned domestic violence as a male prerogative.  What the intolerant, extreme, N-word spouting Guy Gibson might make of all this we’ll never know.  Just a year and a half after leading the Dam Busters, the airman was killed after flying a last raid to drop bombs on Nazi Germany.  He was twenty-six.