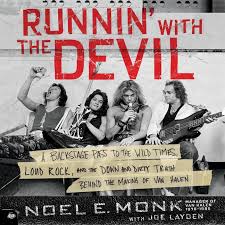 Quick, what’s a popular Californian band, formed by brothers, one of whom was very talented but pretty weird, and another with a major drinking problem, with a rather annoying and eventually balding singer, who were known for catchy songs about girls and good times? If you picked the Beach Boys, correct, but extra points if you picked Van Halen, subject of a recent tell-all biography by their former manager Noel Monk.

The first record I ever bought with my own money was a 45 of Van Halen covering Roy Orbison’s classic “Pretty Woman.”  For neophyte pickers in the 1980s, Eddie Van Halen represented the gold standard of six-string virtuosity; though I soon learned that EVH’s speed and dexterity weren’t the only measures of instrumental talent, for years he defined how rock guitars were supposed to sound and how rock guitarists were supposed to play. The entire debut Van Halen album, later cuts like “Dance the Night Away,” “Mean Streets,” “Dead or Alive,” “Hot For Teacher,” and Sammy Hagar material including “Why Can’t This Be Love,” remain personal favourites.  Van Halen rules, or at least presides.  Or administers.  Whatever.

Monk’s memoir, Runnin’ With the Devil, remembers his work steering the band from their first national tours as a newly signed Warner Brothers act to the huge success of 1984, after which he was dismissed (his non-disclosure agreement only recently elapsed, hence the book), while vocalist David Lee Roth embarked on a fitful solo career, and the Hagar-fronted model enjoyed a few more years of mainstream popularity, before again disintegrating.  While Van Halen’s substance and personnel issues are no secret (Roth and Hagar have both issued autobiographies), Monk still dishes some disturbing dirt: Eddie, an accomplished musician but unsophisticated young man, worried about a prospective paternity suit from a woman with whom he’d only had oral sex; brother Alex was a catastrophically insecure alcoholic who confessed to the manager that he occasionally crawled into his parents’ bed, toting a loaded shotgun, to snuggle between Mr. and Mrs. Van Halen; at one fateful meeting loyal bassist Mike Anthony was heartlessly reduced to a mere employee by the siblings, whereby his only earnings would come from his share of merchandise revenue.  Booze, cocaine, weed, venereal disease, and animosity – Ed and Alex would revert to their native Dutch during fistfights – were staple elements of the Van Halen environment circa 1980.

Runnin’ With the Devil emphasizes the quartet’s identity as “party rock,” and Monk describes how EVH typically conversed in a “stoner-surfer patois” backstage – which indicates Van Halen’s biggest strength and greatest weakness.  Whereas other groups dreamed of making it big in an idealized southern California, this one was already there from the start.  Everything the up-and-coming Led Zeppelin, Black Sabbath, AC/DC, Aerosmith, Lynyrd Skynyrd, and ZZ Top aspired to – beautiful women, plentiful drugs, indulgent record labels, access to state-of-the-art musical and recording equipment in the show business capital of the world – the members of Van Halen grew up with.  They began their professional lives in a rock culture that Zeppelin, Sabbath, and for that matter the Beach Boys had to invent for themselves.  There was thus never much mystery or depth to Van Halen, nor to the Hollywood hair-metal outfits (Poison, Bon Jovi, Motley Crue, Ratt, et al) who came in their wake; this was happy hard rock for the Ronald Reagan decade. As well, Eddie’s fretboard fluency was too often grafted on to forgettable songs, as the solos and incidental licks on routine boogies such as “Unchained,” “I’ll Wait,” or “Everybody Wants Some” made them sound more exciting than they really were, and the formula of technically flamboyant guitarist backed by enabling sidemen wore thin ere long.  In the prime years that Runnin’ With the Devil covers, Van Halen were a great band, but the narrative also exposes how the seeds of their demise were there from the beginning, sprouting in the high schools, shopping malls, freeways, arenas and hotel rooms of sunny, suburban, surfeited USA.

One thought on “Fair Warning”