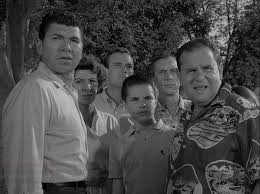 There’s a classic Twilight Zone episode called “The Monsters Are Due on Maple Street,” wherein a series of unexplained power outages one day stir up suspicion and resentment among hitherto peaceful neighbors, until within a few hours the whole city has fallen into violent chaos.  It turns out the outages are indeed the work of aliens, who have learned enough about mankind to figure they can conquer the planet just by starting small, local disruptions and then waiting for the resultant paranoia to take down the veneer of human civilization.  The show fades out on one watchful ET explaining to his comrade how easily the earthlings can be set distrusting and fighting, “one to the other…one to the other…one to the other…”

It’s early days, yet, but what’s remarkable in our current health crisis is how unlikely such scenarios have turned out to be in the face of real emergencies.  Films like Mad Max, Planet of the Apes, and The Terminator, as well as countless other sci-fi plotlines, are premised on the gossamer fragility of modern society:  one sudden disruption of “the System,” and immediately people are cowering in their homes like Night of the Living Dead, or reinstituting ritual human sacrifice, like “The Lottery.”  But while there are clear limits to how much strain social structures can withstand – e.g. a meteor strike, a nuclear holocaust, a zombie apocalypse – the coronavirus outbreak seems to be well within them.

Many of the fictional portrayals of descents into anarchy assume that the key pillars of public order are only there as a favor to the rest of us, until their managers decide for reasons of their own to withdraw their benevolence.  Yet in reality the most crucial functionaries are themselves deeply beholden to an extensive network of others:  health officials need effective police forces, cops need a reliable energy grid, power station employees need a secure food supply, farmers need functioning transportation lines, truckers need stable banks, bankers need doctors, and on and on indefinitely.   Just look how readily we now turn to established news outlets for accurate information, when a few weeks ago it was easy and cheap to dismiss the mainstream media – who doesn’t want to know exactly what’s going on today?

Not one element of our socio-economic structure can hold the others hostage; more then ever, we can see how it’s in no one’s interest to disobey the rules, cheat their fellow citizens, or drop out of an integrated polity.  Cooperativeness isn’t a shallow front we only affect until a problem arises, but the underlying basis for sharing a global culture.  Situations like the present reveal not our helpless dependence on some mysterious, capricious overlord, but rather how deep runs the interdependence of ordinary people.  Anyone can complain about the government or scoff at the notion of civic duty when they’re comfortable – it’s harder to be cynical under a genuine threat.  Even diehard conspiracy theorists are now bound to trust the authority of scientists, physicians, and government agencies to limit the contagion’s impact; even fanatical survivalists should feel obligated to wash their hands.  Inconvenient, uncertain, and, yes, frightening as the world has lately become, this is not a civilization breaking down.  It is civilization kicking in.

One thought on “The Monsters Aren’t Due on Maple Street”