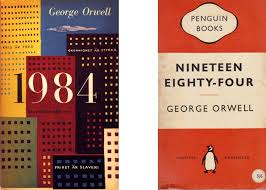 The revelations of the US government’s access to the electronic communications of its citizens have prompted renewed interest in George Orwell’s classic novel of 1949, Nineteen Eighty-Four:  Amazon has reported a 7000 percent jump in the book’s sales, and commentators are comparing the fictional menace of Big Brother to the real threats to freedom posed by the American security apparatus.  For over sixty years, indeed, Orwell’s nightmarish vision has been a ready reference to any totalitarianism perceived to be incubating in our own societies.  Perhaps it is time, finally, to let the reference rest.

Nineteen Eighty-Four‘s ongoing relevance is now claimed by people who hardly seem to have read it.  Two examples:  the telescreens which scrutinized Winston Smith’s every move did not merely observe but immediately respond to supposed Thoughtcrimes, including Winston’s insufficient enthusiasm during his Physical Jerk exercises.  This is not the same as having Facebook posts theoretically available for examination by police; passively listening in, however problematic, is different from actively interfering.  Secondly, Winston’s work in the Ministry of Truth, where he laboriously falsifies official news to reflect current orthodoxies, is far removed from today’s information avalanche, where incriminating stories constantly undermine leaders’ preferred images (think of how politicians’ embarrassing sound bites and photo ops get dug up by their opponents, e.g. the widely seen shot of Donald Rumsfeld shaking hands with Saddam Hussein).  The very fact of Nineteen Eighty-Four‘s contemporary popularity marks the most obvious difference between its imagined dystopia and our modern world.  Nothing as scathingly satirical as Orwell’s writing would ever see the light of day in Oceania.

“My recent novel is NOT intended as an attack on Socialism or the British Labour Party (of which I am a member) but as a show-up of the perversions to which a centralized economy is liable and which have already been realized in Communism and Fascism,” Nineteen Eighty-Four‘s author explained shortly before his death.  Certainly many of the novel’s elements were drawn from recent experience of the war-ravaged 1940s – rationing, propaganda, and sudden missile strikes, like those of the Nazis’ devastating V-2s – rather than wild prediction of the far-off 1980s.  Oceania’s Floating Fortresses clearly allude to the American Flying Fortress bombers, thousands of which flew from Britain during World War II, and Ingsoc’s pervasive atmosphere of suspicion mirrors the internecine squabbling of the mid-century British Left, factions of which despised each other just a little less than they despised top-hatted capitalists.  Orwell can’t be blamed for such topicality, but times do change.

Over the years many readers have strained to find the damning overlaps between Nineteen Eighty-Four and their own presents.  Especially ingenious was media theorist Mark Crispin Miller’s 1984 attack on the enslaving effects of network television, which now seems almost quaint:  “As you watch, there is no Big Brother out there watching you – not because there isn’t a Big Brother, but because Big Brother is you, watching.”   Others have created their own parables of coming repression, notably the brutal Christian patriarchy of Margaret Atwood’s The Handmaid’s Tale, still embraced by feminists in an age of Angela Merkel, Oprah Winfrey, and Lean In.   The late cultural critic Neil Postman, in Amusing Ourselves To Death, was one of the few to suggest that another novel projected a more plausible scenario of political subjugation:  “In 1984, people are controlled by inflicting pain.  In Brave New World, they are controlled by inflicting pleasure…[Huxley] believed that it is far more likely that the Western democracies will dance and dream themselves into oblivion than march into it, single file and manacled.”

Nineteen Eighty-Four remains a very moving story, but its power is diluted when invoked as often as it has lately been.  The most thoughtful retort to those so quick to cry 1984 in 2013 comes from George Orwell himself, in his 1940 essay, “The Lion and the Unicorn.”    “In general, two blacks make a white, half a loaf is the same as no bread,”  was how he articulated the sophistry of English defeatists.  “The intellectuals who are so fond of balancing democracy against totalitarianism and ‘proving’ that one is as bad as the other are simply frivolous people who have never been shoved up against realities.”   The heirs of such scolds today can be heard glibly insisting, in the face of all reasonableness, that because we aren’t basking in their ideals of Utopia, we must be trapped in their dimly understood picture of Airstrip One.