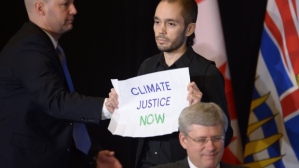 I have no idea what “climate justice” is, but apparently Sean Devlin wants it immediately.  Devlin is the young man who recently disrupted a Vancouver press conference of Prime Minister Stephen Harper by sneaking behind the PM to display a sign, “Climate Justice Now,” before being hustled away by security.  The episode has raised questions about the personal protection of top government officials:  how did an unauthorized person disguised as a waiter get so close to Canada’s most powerful politician?  But a more pressing issue might be:  when did political protests get so stupid?

Soon after the incident, Devlin received his fifteen minutes of fame with some TV exposure on CBC TV, alongside Brigette DePape, a former Parliamentary page who in June 2011 interrupted the throne speech of the Governor-General (a ceremonial occasion where the head of state addresses the national legislature to outline the government’s upcoming agenda) by holding up a makeshift sign reading “Stop Harper.”  Like Sean Devlin, DePape posed no physical threat to anyone, but merely used a choreographed official affair as a backdrop for a staged act of defiance.  Harmless enough, you’d think – except the people most damaged by these stunts are not Stephen Harper or members of his government, but the very causes the stunts are supposedly promoting.

Say what you like about Green Party leader Elizabeth May or longtime environmental activist David Suzuki, they have at least engaged with the political system and put forward their own serious proposals for addressing matters of economics, natural resources, and sustainability.  There’s a thicket of complicated ideas they’re expected to understand and explain to the public at large:  cap and trade, carbon taxes, job creation, alternative energy, and so on.  Sean Devlin’s “Climate Justice,” on the other hand, is just a vague slogan, no more meaningful than “Stop Harper.”  Climate Justice?  How?  When?  Stop Harper?  From doing what?  From serving as an elected politician?  From proposing and passing laws?  From anything?  That’s not a cause, that’s a fridge magnet.

The attention given to Devlin and DePape demonstrates the deterioration of activism from the level of democratic politics to that of the cultural gesture.  To pop up at photo ops demanding Climate Justice or the Stopping of Harper is not to commit to the welfare of a wider community, but to signal an allegiance with an exclusive sect of the like-minded.  The more hostility invoked against a given individual, group, or policy, the better the invokers can feel about otherwise disengaging from the surrounding complexity of ideas and debate.  Their point is not to convince the undecided but to flatter the fellow partisan.  The collective problem is ignored for the solidarity of the factional cause.  “Climate Justice Now” and “Stop Harper” offer the gratification of a superior moral certainty without the effort of actually prosecuting a reasoned case.

While the narcissistic sloganeering of Devlin and DePape is neither new nor confined to any one issue or leaning, it has certainly become louder since the “culture jamming” fad of the 1990s and the publication of Gen-Y-friendly tracts like Naomi Klein’s No Logo.  Klein and the culture jammers recast leftish politics as hipper-than-thou “movements” which scorned the traditional tactics of lobbying or legislating for more insular stances that divided society into duped masses and the edgy informed.  Coherent arguments and plausible alternatives were downplayed; the fact of the opposition alone announced its own justification.  Thus Sean Devlin’s moment in the spotlight may affirm the conceits of a progressivist base and put a particular cultural identity into sharper, smugger definition, but it will not bring us one millimetre closer to climate justice, whatever exactly that might be.

For dissidents of every background, angry and highly publicized resistance to a perceived status quo has become a requisite first step, rather than a regrettable last resort.  The self-congratulatory and self-marginalizing methods of DePape and Devlin make plain once more that no one’s standards are higher, or less constructive, than those who know theirs will never be enforced.