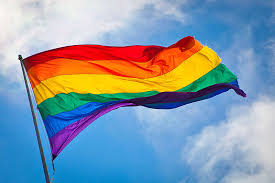 New York, United Nations – In a stunning development that may prove to be the most momentous episode of human history, the end of discrimination against gay people has solved all of the world’s other problems, it was announced today.

UN Secretary-General Ban Ki-Moon declared that international progress in the field of LGBT rights, a chief concern of activists, commentators, and celebrity spokespeople of recent years, was such that every major political and scientific issue facing humankind no longer carries any urgency.  “Now that we have at last recognized that it doesn’t matter who you love, let us rejoice in our collective peace and security,” Ban stated.

In Syria, devastated by a bloody civil war which has claimed over 100 000 lives, rebels and government forces laid down their weapons to celebrate the freedom of gays and lesbians to wed.  Just to the south, Palestinians and Israelis ended decades of mutual hostility to embrace each other in the streets and unite under the familiar “rainbow” banner, honoring the queer community’s long struggle for dignity.

Meanwhile, in China, thousands of coal-burning power plants spontaneously shut down with the news that gay teens would no longer be bullied at school.  The gridlocked Congress of Washington DC erupted in cheers, as normally feuding Democrats and Republicans put aside their differences to pass significant legislation and deal with the US debt crisis.  “It’s all because of gay rights,” an unidentified Congressman was quoted, weeping tears of joy.  “If we can promote awareness of alternative lifestyles, then anything is possible.”

Around the globe, medical officials noted that hitherto incurable diseases among millions of patients have gone into remission, due largely to the wearing of pink shirts by hospital staff members.  In pediatric oncology wards, terminally ill children were gladdened by the international eradication of homophobia.  “I’m so happy that my dad can marry another dad if he wants,” said Timmy, a six-year-old leukemia victim from Australia.  “Even though he’s already married to my mom.”

Elsewhere, nations with traditionally spotty records on human rights, including Russia, Iran, and North Korea, blossomed into thriving democracies virtually overnight, as the end of discrimination based on sexual orientation triggered sweeping cultural and political changes which won the enthusiastic approval of non-homosexual groups including women, disabled people, and ethnic and religious minorities.

Back at the UN, Secretary Ban was heard to ask, “Who would have thought that something which affects no more than ten percent of the world’s population, if given enough public attention, would so miraculously transform the lives of the remaining billions?”  He then took part in the swearing-in of his successor as United Nations head, advice columnist Dan Savage.