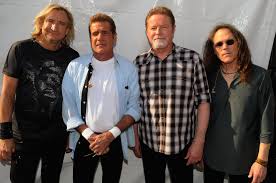 I like the Eagles; I’ve always liked the Eagles.  “Take It Easy,” “Wasted Time,” “Lyin’ Eyes,” “Tequila Sunrise,” “Desperado,” and, yes, “Hotel California” are great songs no matter how often I’ve heard them or strummed them on my guitar, and the band epitomizes the jaded glories of 1970s California rock:  denim ‘n’ dope, cocaine ‘n’ cowboys, laid-back and burnt-out – that’s the Eagles, and right on.

But the group’s 2013 authorized documentary, History of the Eagles:  The Story of an American Band, also epitomizes the self-indulgence and corporate greed for which they have been long criticized.  While all current and former members of the act are represented in the program through interviews and a wide selection of musical clips and archival footage, the final authority over the recordings and the story clearly rests with Glenn Frey and Don Henley.  Frey in particular comes across as a pompous bully, arbitrarily deeming Bernie Leadon, Randy Meisner, and Don Felder expendable (there’s some priceless audio here of Frey and Felder nearly coming to blows onstage), and boasting about his post-1980 accomplishments, like “The Heat Is On” and a part on Miami Vice, which hardly seem much to boast about.  Likewise, the more embarrassing tales of Eagle drug use and debauchery – Henley was arrested with a minor female in 1980, among other of his widely reported indiscretions – are sanitized out of the account.  A lot of classic rock bands have issued “official” video bios which gloss over their least attractive misadventures, but in this regard, The Story of an American Band is notably egregious.

Why is this?  One obvious explanation is money – the Eagles made plenty of it, and the richest members have the clout to dictate the public image that most flatters them.  Like Gene Simmons and Paul Stanley in Kiss, Frey and Henley have gained total control over something most fans want to believe is a collaborative effort.  From the Beatles on down, rock ‘n’ roll ensembles have always faced artistic and personal infighting, and few of them have showed good taste enough to shut down when the original or best-loved lineup stopped getting along.  The Eagles managed it for a while, but apparently the lure of lucre proved too much.  The Story of an American Band highlights the 1994 Hell Freezes Over reunion and even forgettable subsequent work (e.g. Long Road Out of Eden), as if they were all equally part of the Eagles’ brilliant legacy, rather than Frey and Henley’s continued exploitation of it.

I was never a big punk rock fan, but viewing The Story of an American Band I could understand why punk had to happen when it did.  The Eagles were an extreme instance of the narcissism and complacency which infested rock culture in the 1970s, when coked-up jet-setters still pretended to be humble acoustic troubadours; sooner or later that conceit had to be punctured.  And though the Eagles were undeniably talented vocalists, instrumentalists, and composers, their sensitive singer-songwriter style also produced much of the empty folk-rock noodling which the biker magazine Easyriders once lampooned as I was sitting here with my thumb up my ass, so I thought I’d write this song…  In that respect, the Eagles kept company with the other infamously introspective artists of their era, including Jackson Browne, James Taylor, Joni Mitchell, and Charles Manson.  After The Story of an American Band, I recalled a review once leveled by Dave Marsh of Rolling Stone at Led Zeppelin’s similarly pretentious 1976 vanity project The Song Remains the Same:  to paraphrase Marsh, the Eagles’ music remains worthy of respect (though their best work is behind them), but their sense of themselves merits only contempt.