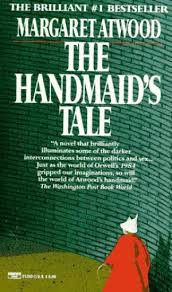 Margaret Atwood’s 1985 novel The Handmaid’s Tale has just been remade as a TV mini-series, starring Elisabeth Moss, twenty-seven years after a 1990 cinematic adaptation with Natasha Richardson, Faye Dunaway, and Robert Duvall.  The Handmaid’s Tale is a widely acclaimed dystopia depicting a future Christian patriarchy, the Republic of Gilead, where fertile young women are reduced to breeding machines and all females are subservient to their male masters; Atwood’s vision is said to be newly relevant in our era of a crudely sexist US president and continued struggles against gender oppression.

Let’s consider that.  The pussy-grabbing Donald Trump is deeply unpopular and won the vote of millions fewer Americans than his female opponent.  The leaders of Britain and Germany (and soon, perhaps, France) are women, as are the premiers of three Canadian provinces and the governors of four US states.  Across virtually all western democracies, women’s rights as citizens are identical to men’s, and women’s access to reproductive health treatment and day care services is widely available.  In education and employment, indeed, it is boys and young men whose metrics are worrisomely behind those of high-achieving females.  Behind all this, certainly, remain workforce inequality and media objectification, but, overall, women’s lives in 2017 seem a long way from their counterparts’ in the Republic of Gilead.  So why is The Handmaid’s Tale routinely cited for its prescient portrayal of an impending misogynist totalitarianism?

Although Atwood’s fiction is often classed alongside Nineteen Eighty-Four, Brave New World, A Clockwork Orange, and even The Hunger Games in projecting a socio-political tyranny to come, it may have more in common with Tim LaHaye’s and Jerry Jenkins’ Left Behind series (about the Biblical rapture), Alan Moore’s V For Vendetta (about a fascist Britain), or even Andrew MacDonald’s The Turner Diaries (about white nationalist rebellion) – like those works, The Handmaid’s Tale could be categorized as “advocacy dystopia” or, less charitably, “paranoid fantasy.”  Whereas Orwell, Huxley, and Burgess seemed to implicate every reader as potential accomplices of an imminent police state, the later authors have more selective ideological axes to grind.  In her case, Atwood flatters a specifically feminist audience as eternal victims of religious conservatives, Americans (the Republic of Gilead is in the former United States), and men.  It’s this scenario, I think, that accounts for the continued appeal of The Handmaid’s Tale.  The novel’s premise may be unlikely, but it ticks every box of sexual politics approved by Women’s Studies majors and the activists who’ve been smugly pronouncing it “more pertinent than ever” since the Reagan administration.

Of course, you could also say that Nineteen Eighty-Four plays to rabid anti-communists and Brave New World titillates those of us who can’t stand junk entertainment, but the manipulations of The Handmaid’s Tale are especially slanted.  The problem is not that the book “hasn’t come true,” which is an unfair standard for speculative fiction, but that it extrapolates a too-broad prospect from a too-narrow contemporary phenomenon (admittedly there exist brutal patriarchal theocracies in our present, but we don’t want to be accused of Islamophobia, now, do we?).  I hold no brief for evangelicals, or the anti-abortion movement, or the traditional family values crowd, or the Trump administration; I just don’t think that they’re influential enough to ever transform society, nor that they’d ever create the kind of martyrs Margaret Atwood’s progressive, empowered, and very dogmatic devotees fancy themselves to be.

One thought on “Nice Piece of Tale”